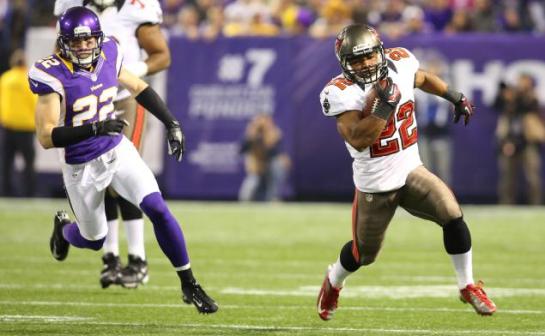 When viewing the vessels of a shipyard, we see units that are being built initially or those that are retooling for an endeavor that requires additional equipment. In some instances like the Tampa Bay Buccaneers, the ability to navigate choppy waters has become easier with the addition of a new outboard engine in the form of rookie RB Doug Martin. Up until last week’s game against Minnesota, the offense was rudderless depending on a passing game that moved the ball in fits and starts. Bouyed by Doug Martin’ dynamic performance (135 yd rushing / 79 yds rec.) their offense rolled throughout in a dominating 36-17 performance. http://www.nfl.com/voting/players-air-and-ground/2012/REG/8?module=HP11_content_stream_voting_fedex#playerId:0ap2000000085516

In their last two games, Martin has gained 336 yards of total offense and scored 3 touchdowns. Something was discovered 3 weeks ago during the team’s bye week. Head Coach Greg Schiano must have been hit in the head and mistaken his young running back for Ray Rice, whom he coached in college. In that time he has turned to his rookie runner more and the team has averaged 34 points per game ever since as compared to 20.5 over the first four weeks. Undoubtedly the game is slowing for Martin who has adjusted to the speed of the NFL. With back to back games coming against the struggling Raiders and Chargers, who just lost to Cleveland (seriously?), this team could be 5-4 and winners of 3 out of 4 before they take on Carolina and Atlanta in pivotal divisional match-ups. If any of you have been following the feud between the Bucs and Atlanta, you will not want to miss that game.

Before we go there, lets take a look at the standings:

Leaving the shipyard and headed for uncharted waters sail the Atlanta Falcons. What has been interesting over the last two months is how few want to recognize them as the best team in the NFC or the NFL for that matter. The key to becoming a champion in the NFL is winning the close games. Especially those against lesser teams who are hard to get up for, or in last week’s match-up with the Philadelphia Eagles, a wounded dangerous team desperate for a win. Over the last few years, games of the latter category gave the Falcons problems. This time they came out with purpose and were up on the Eagles 24-7 before Andy Reid’s team knew what hit them.

Michael Turner helped the Falcons control the tempo of the game with 24 carries.

Even more remarkable was the fact in 13 seasons, Reid’s team were 13-0 coming off of bye weeks. Although the Falcons have a 3 game lead in the division, they took this road game very serious and set the tone from the outset. Philadelphia’s big name secondary was lit up by Julio Jones who had 5 receptions for 123 yards and scored from 63 yards out. Matt Ryan was 22 for 29 for 263 yards and 3TDs and is having an MVP type season. Do you realize Matt Ryan had a career high 29 touchdown passes last year yet is on pace for 39 this season??

This was a big road win that showed how this team and coaching staff is maturing. Pundits and fans have scoffed at their early playoff exits of the last few years but this team is playing with a gritty resolve not seen in previous seasons. Last week’s game against the Eagles was the type of game the Falcons would inexplicably not show up. Exhibit A: Last year during the second half they could solidify themselves as legitimate Super Bowl contenders, yet lost a game to the Houston Texans and were swept by the New Orleans Saints in a five week stretch. Those could have been confidence building wins yet left the team doubting itself. That doubt showed in the 24-2 ouster in the playoffs by the world champion Giants.

However this year we have Exhibit B: They held off Peyton Manning and the Broncos in a Monday night thriller 27-21. They knocked back a Washington Redskin team which is a mirror image of who they once were 24-17 and now this win. These wins against quality teams are those that have you believing in yourselves by season’s end. Especially when you can step on a team that desperately needs a win and you perform that feat on the road. Naysayers will conclude they haven’t played other top-tier teams but that isn’t the Falcons issue. Just keep winning games and building confidence for the playoffs. Food for thought?? Once upon a time, there was a Miami Dolphin team that went 14-0 in the regular season and won the Super Bowl. They only beat 3 teams that year with a winning record…so don’t listen to the idiot pundits who miss this.

Now we have to talk about Cam Newton and the Carolina Panthers. Looking at their record the quarterback is the first to get the blame when truth be told, Newton has given the team four 4th quarter leads this season. The fact their defense keeps letting the team down is what everyone is missing. Nevermind the frustrated press conferences of Cam Newton. Head Coach Ron Rivera may be sunk if his team gives up any more 4th quarter leads. It may be in the Panthers best interest to pick up a receiver before the trade deadline to help open up the offense. With Steve Smith (35 rec. 589 yards/ ZERO TDs) they have a good mid-range receiver. They need someone to blow the top off the defense to back the safeties back from the running game. Everyone knows the Panther offense can be defensed 20 yards and in. Once they can get a deep receiver this could open up the offense both running and passing. They still have time to right the ship…they just have some work to do.