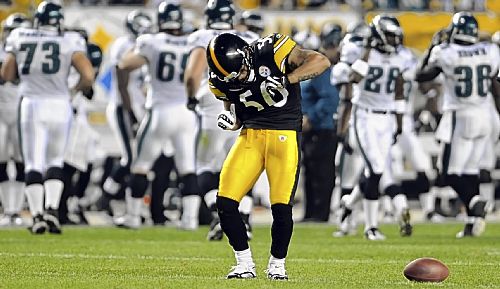 The glue to this year’s defense…Larry Foote

At one point last year the AFC North featured four of the top five defenses in the NFL. This year however has seen a reversal of that trend as only the Pittsburgh Steelers have maintained solid defensive play. For some teams you want to say it’s due to injuries or free agent losses yet the Steelers have been afflicted with the same things yet have stayed productive on that side of the ball.

Didn’t this team lose James Farrior, Aaron Smith, and William Gay in the offseason?? Then you factor in the 10 games lost due to injury to two former NFL Defensive Player of the Year recipients in Troy Palamalu (7 missed) and James Harrison (3 missed)?? Then you had FS Ryan Clark miss the 1st game due to sickle-cell complications against Denver. What is keeping this defense together??

Enter Larry Foote. The Steelers lost him too… back in 2009 when he played that season for the Detroit Lions. He almost signed with Arizona and former Steeler assistant now head coach in Ken Wisenhunt, for 2010 when Pittsburgh righted a wrong and brought him back. He started for the two winning Super Bowl teams while finding a role on the one that fell to the Packers in XLV. His best year was 2005 when he had 102 tackles and 3 fumbles to help he and Jerome Bettis play Super Bowl XL in their hometown of Detroit.  For 2012, he’s amassed 64 tackles, 3 sacks, forced 2 fumbles while recovering 2 more. He’s on pace for 114 tackles, 5 sacks and 4 forced fumbles. If this keeps up, you have to include him in defensive player of the year discussions. This inspirational play is what leads the #1 defense in football into a pivotal match-up with the 28th ranked Ravens who are missing theirs.

The Ravens ranked 28th in defense?? We wouldnt’ lie to you but first the tale of the tape:

Going into this pivotal game between the Steelers and Ravens is how quietly Pittsburgh has won 5 of their last 6. Slowly they have crept into contention. The offense revised by Offensive Co-ordinator Todd Haley was starting to make waves and then… the Roethlisberger injury. The good news is, it happened during the game where Byron Leftwich was able to knock off some rust. Wide out Antonio Brown is out for this one and Leftwich needs to be patient and lean on his running game and defense.

Has there been a more deceiving 7-2 team than this year’s Baltimore Ravens?? Yes we know they have won 6 of their last 7, but against who?? That isn’t entirely fair either, this team did beat New England and found a way to win against Dallas 31-29. However we have to be honest in assessing their season may have peaked at that point.

Since that October 14th win they have lost Ray Lewis to a tricep injury that will sideline him until the playoffs. Then in a big game on the road against the team they knocked out of last year’s playoffs, Houston drew and quartered them 43-13. In light of last week’s 55-20 blowout of Oakland, the Texans game is more of an indicator of how strong they are at the present. On the road this team is averaging only 15 points and their two road wins came courtesy of Cleveland and a lackluster 9-6 win over the Chiefs.

If this game were taking place in Baltimore, we believe the outcome would be different. However these two play again in three weeks at the “Big Crabcake” which give the Steelers more urgency to win this one at home and we think they will.

The downfall of the Ravens defense is as big a story this season as Peyton Manning bringing life to the Broncos offense. Haloti Ngata, long since thought to be the best defensive linemen in football, is dinged up yet playing at a high level still. His 31 tackles and 3 sacks are a season’s worth for other interior linemen. If Dannell Ellerbe can make a few more splash plays he could help lead the Ravens to an upset in Pittsburgh. On the season he has 60 tackles and 3.5 sacks yet won’t get recognition with such a low defensive ranking or we’d be asking “What is the glue holding together the Baltimore defense?” now wouldn’t we?? He is to the linebackers what SS Bernard Pollard is to the Ravens secondary: They both live in the shadows of future Hall of Famers Ray Lewis, Ed Reed, and possibly Terrell Suggs. This game is where Ellerbe and Pollard (69 tackles) need to make some turnovers happen. Between them, only 1 interception, no forced fumbles, & no fumble recoveries or these two would be recognized among the best defenders in the league this season.

One ace up the Ravens sleeve is Jacoby Jones. He hasn’t been here for all the Ravens v. Steelers games for the past decade so he hasn’t been burdened with past big game losses. His explosiveness on kickoffs (14 returns / 540 yards / 2TDs) has been a welcome addition to a team that depends too much on Ray Rice on offense. Also Joe Flacco, in a contract year, has been dismal on the road. Look at these stats: 71 of 136 for 719 yards, 3TDs and 4 interceptions. He’s only completing 52% of his passes when he constantly checks down to Ray Rice?? It’s not like he’s faced the 1985 Chicago Bears. He faced the 11th ranked Chiefs and couldn’t muster a touchdown in a 9-6 win and only threw for 153 yards with one touchdown against the 24th ranked Browns. Now he’s supposed to go into Pittsburgh on a Sunday night against the #1 defense in football?? Last time we saw him against the #2 defense Texans he was sacked for a safety as the Ravens lost by four touchdowns. Again we say “in a contract year”. The Ravens should go shopping for a quarterback after this season because this isn’t leadership. Everyone talks of Michael Vick regressing, what is this?? Its been masked by the Ravens record but that should get exposed in Pittsburgh. Stay tuned.

One thought on “NFL Week 11: AFC North -The Defense Rests…Literally”

In the last 8 years, each team has won one. The Dick Vermeil/Andy Reid Bowl. Both coached in both places. Super Bowl LVII will be a great game.
Trent Dilfer on Bullies from Baltimore Sunday night: "The modern game doesn't impress me. It's so easy to play when you can't hit the quarterback or receivers over the middle or reroute receivers."
Just.... lol
Mama Kelce in the pre show...
What do you mean no one you would t trade for Derek Carr or Aaron Rodgers??
Loading Comments...