Colin Kaepernick basking in the afterglow of Monday night’s win over Chicago.

The San Francisco 49ers are playing russian roulette with their current quarterback situation. Alex Smith has earned his starting role and with his recent injury, allowed 2nd QB Colin Kaepernick some much needed playing time. First he takes down Chicago on Monday night 32-7, and now he plays well in his first start when Smith has been healthy, winning 31-21 in New Orleans. Yet how great a chance does this team fare changing quarterbacks so late in the year?? The history of the NFL is littered with losing lottery tickets by teams rolling the dice with the quarterback position heading into the playoffs. Why should the 49ers be any different?? The Chancellor expects disaster… how did those other teams fare??

Once upon a time there was a team called the New York Jets. It was 1986 and the team started 10-1 and were the best team in the AFC. However there was a disturbing 45-3 loss to the Miami Dolphins on a Monday night, which sapped their confidence and sent them into a tail-spin. After losing their last five, Head Coach Joe Walton figured to make a coaching change at quarterback as they headed into the ’86 playoffs. They replaced Ken O’Brien with Pat Ryan…how did they fare?? Well they beat the Kansas City Chiefs in a wildcard game 35-15 but fell in double overtime to the Cleveland Browns 23-20.

In that game, the Jets quarterback was knocked out and Ken O’Brien had to come back in. Neither played well on the road and were sacked an NFL playoff record NINE times in that game. Are you sure you don’t want continuity going into the playoffs Jim Harbaugh?? Well the Jets fell on the road…had they played at home they would have been in better shape, right??

Then you had the defending champion Chicago Bears in 1986. Jim McMahon was slammed to the turf by Green Bay Packer Charles Martin and lost for the season. Now the Bears had Steve Fuller and Mike Tomczak who were there for the 1985 season and it was Fuller who brought Mike Ditka his first playoff win in 1984 over the Washington Redskins 23-19. As the 1986 season was dwindling down, Iron Mike decided to sign Doug Flutie, who hadn’t played NFL football yet. With a 14-2 team and a record setting defense (187 points allowed) the team had won close games yet Ditka decided to go with the “hot hand” and go into the playoffs with a quarterback with 2 prior NFL starts.

The Bears were at home and had to face an inferior team in the 1986 Washington Redskins with first time playoff starter Jay Schroeder. One significant difference though is Jay was the starter for the entire season and had his first win in the wildcard over Los Angeles…19-7. In the divisional round Jay Schroeder in his 18th start in 1986 was pitted against Doug Flutie in his 3rd. So what happened?? Dexter Manley and 6ft 5 inch Charles Mann batted down 4 of his passes and chased him all over Soldier Field. Flutie went for 11 of 31 for 134 yards, 1TD but 2 big interceptions on his side of the 50. Just enough for the Redskins to pull off the upset 27-13 and end the Bears chance to go back to back. Thirty five percent was all Flutie could complete at home without crowd noise??

Keep in mind Redskin defensive co-ordinator Richie Petitbon had come up with a confusing set of alignments Flutie wasn’t prepared for. In a playoff game on the fly, an inexperienced quarterback can be unnerved in the NFL playoffs and there are hundreds of lessons where it’s been done. We, at Taylor Blitz Times showcased one in Fritz Shurmur’s Zone Blitz Eagle Defense that unnerved Randall Cunningham and confounded quarterbacks in the 1989 playoffs. Coach Harbaugh, are you sure you want to have Kaepernick in game 6 or 7 face a confusing Giants or Falcons defense?? It takes much more than a few games to get up to NFL game speed…then another to get to NFL playoff speed. What can a quarterback thrown off his game do in a playoff even if he has a strong defense to bail him out?? The defense should keep them in a close game… will he have enough time to bail his team out in a one and done scenario like the NFL playoffs??

The year was 1999 and the Buffalo Bills fielded the #1 defense in all of pro football. Going into the last game of the season, Bills brass had been in Head Coach Wade Phillips ear about playing Rob Johnson. He had been an expensive free agent in the offseason, whom Flutie beat out during the year, yet brass wanted to see what they had in Johnson. So the finale would have the Bills at home against the Indianapolis Colts who were also resting their starters for the post season. Johnson had a good game as the Bills won 31-6, prompting the pressure to play Johnson in the upcoming playoffs.  For the second time in NFL history, a team replaced it’s starter going into the playoffs without injury forcing the decision. So what happened??

The 1999 AFC Wildcard tilt had the Bill travel to face the Tennessee Titans and super rookie Jevon Kearse. In a defensive struggle the momentum of the game turned when a punt put Buffalo near their own 10 yard line. Wouldn’t you know Jevon “The Freak” Kearse chased and sacked Rob Johnson for the first score of the game. The ensuing short kick put the Titans in Bills territory where they scored to take control 9-0. Forever leaving Bills fans wondering if Kearse would have caught the elusive Flutie, who by now had been a Bills starter for the better part of two years at this point.

Nevertheless Rob Johnson had a dismal day as he tried to adjust to a blitzing Titan defense and the speed of NFL playoff football. It took until the Bills final do-or-die drive where he completed 5 passes to get Buffalo in range to kick a field goal for a subsequent 16-15 lead with :12 to go. Then came the short kick that led to The Music City Miracle, Kevin Dyson’s return of a lateral from Frank Wycheck. Although the Bills #1 defense led by Bruce Smith’s 2.5 sacks in his last game as a Buffalo Bill had held the Titans in check, it was offset by the 6 sacks Tennessee engineered. Furthermore, Johnson was anemic in the game going 10 for 22 and 131 yards in the game. Yes that includes the five completions on the final drive.

Leading to the inevitable question: Had Flutie been able to elude Kearse and that first safety would the Bills have gained the upper hand with their playoff experience?? Tennessee was in it’s first playoff game. Then the other question was: Had the safety not taken place and Buffalo was up 16-13 instead of 16-15, would the Bills have kicked the ball deep instead of overcoaching with a short kick?? 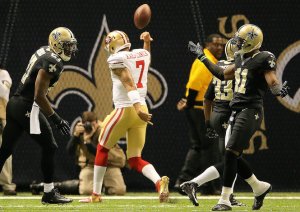 Nevertheless, in the past the defense did what they could to keep the score down. It almost worked for Rob Johnson that day, will it for Colin Kaepernick?? Everyone of Alex Smith’s detractors say he’s the beneficiary of a great defense. Well in a 31-21 win over the Saints which included 2 defensive touchdowns by Ahmad Brooks and Donte Whitner respectively, isn’t that what was provided for Kaepernick?? Wasn’t that the same in Monday night’s game against Chicago??

Do you realize for the season Alex Smith has a better completion percentage than Colin Kaepernick?? For the season including Sunday’s game with the Saints, Smith has connected on 70% of his passes for 13TDs and 5 interceptions versus Kaepernick’s 64% for 3TDs and 1 interception. Even the game Sunday, Colin was only 16 for 25 for 231 yards, 1TD and 1 pick and was bailed out by those two defensive touchdowns.

Sure he brings a missing element to the table with his mobility but you now give up the seasoning of a quarterback who went through last year’s playoffs. Take that back, he excelled in last year’s playoffs. First he came of age by outdueling Drew Brees in the divsional round… Remember his 24 of 42 for 299 yards, 3TDs and no interceptions which included a game winning rocket to Vernon Davis. Then in an NFC Championship overtime loss to the Giants, he never threw the ball up with pedestrian receivers covered tightly by New York. This kept them in the game and without the late game special teams disasters could have played in Super Bowl XLVI.

So now if you decide to go with Kaepernick, you’re replacing playoff experience for?? You tell me… If San Francisco goes with a late season quarterback switch, not to be a nay-sayer, but NFL history tells us this is a playoff disaster waiting to happen. Sure there was the Tom Brady year of 2001 but he started in week 3. Then you have the 1990 – Jeff Hostetler scenario replacing an injured Phil Simms in week 14, yet he’d been with the Giants for 7 years and had some experience.

Coach Harbaugh, it would be in your best interest to approach this in the offseason. No matter what pressure you’re getting from brass to put in the high draft pick. Once upon a time, Alex Smith  was a 1st rounder for you compared to Kaepernick’s 2nd round selection. A possible visit to Super Bowl XLVII could hinge on this decision. Don’t wake up in a 17-13 slugfest in the playoffs against the Giants and need a touchdown with a first time signal caller under center. With a possible Super Bowl win you can get up to 6-7 years extended on your contract. Another playoff loss, no one, not even the brass aiding in this decision will give you a mulligan for a playoff loss with a first time quarterback. Take heed…you can go with the flavor of the month but realize they don’t make history.