Russell Wilson has proven himself all season long. The playoffs shouldn’t intimidate him.

Now after a blistering finish to the NFL regular season we have two of the NFL’s best stories meeting in the Wild Card round. This might be the first time two rookie quarterbacks have faced each other in the NFL playoffs. Where there has been great and deserved fan-fare over Robert Griffin III resurrecting the Redskins, think about the maturation of Russell Wilson. After beating out high priced free agent Matt Flynn, he has taken the job and improved as the season has gone on.

The first battle-line that can be drawn: Can Russell Wilson win this game on the road?? In the early stages of this season you’d have to say no, but if you look at his performances in the latter stages of this campaign you have to say yes. Some prognosticator today will blurt out the Seahawks 3-5 road record today. Don’t forget they had to grow into allowing Wilson more playbook freedom as the season progressed. The defense kept them in games early and each of those losses were by 6 points or less.

The reason we’re watching this team in the playoffs and not the Chicago Bears is their week 13 , 23-17 win in Soldier Field. Wilson came of age as he hit Sidney Rice for the game winner in that overtime thriller. Serious wild card ramifications were on the line and Seattle pulled through on the road. Couple that with his 3 rushing touchdown performance on the road against Buffalo in Toronto, this team is now portable. Wilson, along with RGIII, are no longer rookies. When you’re in your 17th game in the pros, you now know what to expect. Get this: Dating back to October 18th, Russell has only thrown 5 interceptions with only 2 of those coming on the road and none in his last 3 away from Seattle. He’s a smart player and has grown as the games have grown more important. 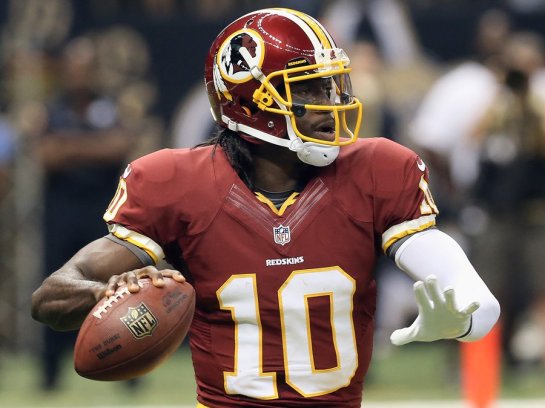 From th eopener to the present, Robert Griffin III has come to be the face of the veteran laden Redskins.

Did we just say something about growing as the games have grown more important?? Robert Griffin III’s rookie season can only be marveled at. Did you see the exchange between he and Santana Moss as the clock wound down against Dallas in the season finale?? Our CEO can’t remember the last time a rookie quarterback held that much sway as a leader among teammates much older. Someone may say what about Andrew Luck?? For the most part the Colts are young whereas this Redskin team is full of veterans.

However this is the NFL playoffs and something has to give… We have a Redskin team in the midst of a 7 game winning streak against a Seattle team that has won 7 of 8. This game is going to come down to defense…plain and simple. The Seahawks are 4th overall and have only given up 17 points on average in their last few outings. The Redskins are 28th. When it comes to defensing the run, the Redskins are actually ranked high…5th against the run. However a closer look reveals that they are 30th against the pass so that is a bit of a misnomer.

In all actuality the Redskins have been abysmal on defense. Six teams have scored 27 or more on this group this year. Sure none have scored that much in 4 weeks but let’s ask the question: Does that have more to do with the Redskins defensive prowess or does that have to do with scaled back game plans by opponents as the temperatures dropped?? We told you as far back as week 2 that this Seattle defense was supremely stout. https://taylorblitztimes.com/2012/09/21/nfl-week-3-nfc-west-not-just-the-province-of-the-49ers/. They have been no further back than 6th in all of football.

With a gimpier RGIII in a knee brace, this defense can track him down and make life miserable for Redskin 1,000 yard rusher Alfred Morris.  Griffin will have to throw into the lair of Cam Chancellor and Pro Bowl S Earl Thomas. The portable running game that doesn’t need the quarterback’s play-faking that will get on track is Marshawn Lynch, who has run for 1,590 yards and 11 touchdowns. Although Alfred Morris has outgained him (1,613 yards /13TDs) lets face it…. he benefits from a mobile RG III keeping the backside of the defense honest. Without that, the speedy Seahawks should be able to cascade down on Washington’s running attack.

The defensive prowess stepping to the fore…we have to pick Seattle in this one.

Go Blue!!!!
Way back Wednesday... this dude 🤦... nah just phukkin' around. Of all the linebackers I watched play college ball two always knocked 'em back on contact. Wilber Marshall #88 at Florida on the outside and Marvin Jones <---this dude in the middle. Still pissed at him for that hit on Jones in '93. He owe his Mama an apology... lol Cant hit that woman's son like that! Damn🤣
Think I'll get some writing done...
Watching a few Football Life episodes while cleaning the inslirational pieces.
Just heard the doorbell ring...out by the fire and Amazon just delivered this @steveschirripaofficial @realmichaelimperioli
https://wp.me/p18f1N-2sf
Loading Comments...