Finally Super Sunday dawned like Christmas day for football fans and of course the Baltimore Ravens and San Francisco 49ers. However once the game kicked off the 49ers inexperience immediately hampered early success. After forcing a 3rd and nine where the Ravens didn’t convert, Ahmad Brooks jumped offsides giving the Ravens new life. The Ravens converted and scored with Flacco hitting Anquan Boldin from 13 yards out to make it 7-0 Baltimore.

As expected the 49ers came out in the Pistol offense and moved the ball for the next couple of drives but went 1 of 3 on their first third downs and kicked the ball several times to the Ravens. They did have Ray Lewis and the Ravens befuddled as they drove the football and kicked a field goal to cut it to 7-3 before inexperience hit San Francisco again. On a quick outside play, LeMichael James instead of going down, fought for more yards and had the football knocked loose and the Ravens recovered.

The subsequent drive had one of the highlights in Flacco’s career. While holding a pensive 7-3 lead Joe was flushed by a blitzing Aldon Smith and scrambled to his right. Where it seemed like a perfect time to throw it away, the new Joe Flacco heaved it for 30 yards where Anquan came up with the football. A huge first down that allowed the Ravens to keep the momentum and take a 14-3 lead. Even if you go back to the first play of the game, Kaepernick hit Vernon Davis with a 20 yard gain. It was called back with an illegal formation and they stayed a step behind Baltimore ever since. 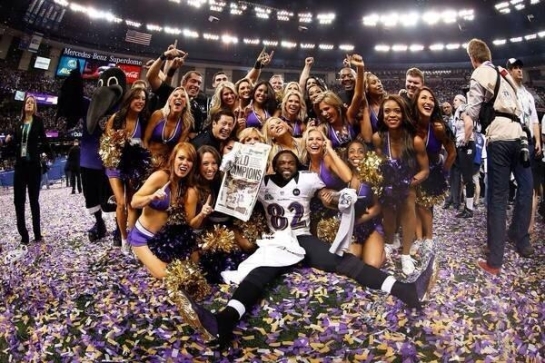 Torrey Smith and the prettiest Ravens in the building.

Then the quarterback that swore he was never nervous about the Super Bowl, showed his nerves as he overthrew his receiver and S Ed Reed picked it off on the San Francisco end of the field. Frustration boiled over as a fight ensued. The 49ers have played on the edge being a defensive bully on the NFC block and they were getting beaten by a team that has been an NFL bully for 13 years. The 49ers thought they were the more physcial team and found out they had run smack into a buzzsaw. They were down 14-3 and were starting to sweat. After a botched fake field goal gave the Niners the ball back Kaepernick was jittery and nearly threw a second interception to a diving Cary Williams. Then the Jacoby Jones highlight reel started.

First Flacco hits him with a 56 yard bomb to put the Ravens up 21-3 and he totally had blown by the secondary for the catch. He then got up and raced into the end-zone and the Ravens were up 21-3 and it looked like they were headed to hoist the trophy. After a field goal by the 49ers to cut the lead to 21-6, the momentum was clearly Baltimore’s as the teams left the field.

Coming from halftime, the first thoughts were for the 49ers to stop the Ravens who were going to get the ball after the kick. Get the Ravens to  go 3 and…..ooops!! Jacoby Jones sets a league record by bringing the second half kick 109 yards for a touchdown to make it 28-6 and the ballon of confidence popped on the San Francisco sideline!!  A few plays later the lights went out…literally! We had a 36 minute play stoppage but the Niners were about to be blown out of the stadium.  Or so it appeared… It was eery watching the players try to keep warmed up in a semi-dark Super Dome. The only delay that was close to this was the “Fan-Man” incident during a Riddick Bowe v. Evander Holyfield championship match in 1993.

After the outage, the Ravens came out flat and the 49ers seized the momentum, outscoring the Ravens 17-0. First a touchdown throw from Kaepernick to Crabtree for 31 yards to first cut the lead to 28-13. On the next series Flacco is swallowed by Ahmad Brooks on third down forcing a punt. Then the game swung big time! First Ted Ginn Jr took the punt around midfield and ran it back to the Raven 20 yard line. Couple plays later Frank Gore took a handoff around right end on a counter and the 49ers had cut the game to 28-20. Over the next few minutes the 49ers had all the momentum and it looked like the Ravens were hanging on for dear life.

In a wild second half Colin Kaepernick found his groove. He eventually completed 16 of 28 for 302 yards and 1TD to Michael Crabtree. He also rushed 6 times for 62 yards and the touchdown to cut the Ravens lead to 31-29 with just over 7 minutes to go in the game. Kaepernick’s game was transcendent and elevated this Super Bowl into one of the greatest ever. He completed all the throws and shook off his second quarter jitters and being down 34-29 after a Ravens field goal, everyone held their breath as the Niners raced downfield.  With just over two minutes to go, Frank Gore burst around left end and gave the Niners a first and goal from inside the 10 yard line. San Francisco was on the brink of the greatest comeback in Super Bowl history. They just needed 8 yards… 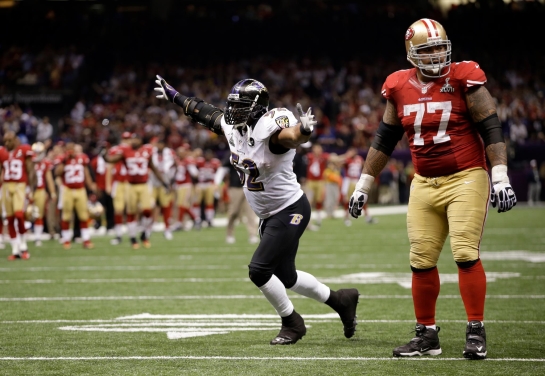 The last play of Ray Lewis career. A 4th down incompletion in Super Bowl XLVII.

That’s when the heart of a champion showed up in the form of the Baltimore Ravens defense. They stuffed one running play and played discipline football in stringing out two passes to the sideline. There were no openings for Kaepernick to throw the football. Then as it had on a two point attempt earlier, the Ravens blitzed on 4th down, Kaepernick lofted the ball for Michael Crabtree but the throw was errant thanks to the pressure. Baltimore escaped with a World Title thanks to a goal line stand to end Ray Lewis’ story career.

The MVP of the game was Joe Flacco and it could be argued that he almost played his way out of it. In the first half he was brilliant throwing for 192 yards with 3TDs on 13 of 20 passes. Once he was sacked by Brooks during the 49ers furious 3rd quarter rally he stopped throwing downfield and started to look like “the old Joe Flacco”. Yet once the Niners cut the lead to 31-29, Joe drove the Ravens on a 10 play 59 yard drive and gave the Ravens defense 5:29 of possession time to rest. On the drive he hit Anquan Boldin with three passes, one a critical third down that kept the chains moving. The subsequent 38 yard field goal by Tucker put the Ravens up by 5, 34-29 and no one was safe.

Ray Lewis, from The [[_]] hoists the Lombardi Trophy for the second time in his last NFL game.

In the end, the Ravens gutted it out in that goal line stand and the difference could have been borne from the rest Flacco and the offense gave them from the previous drive. After three plays the Ravens took a ceremonious safety that gave them a 34-31 lead while effectively running out the clock.

World Champion Baltimore Ravens! The victors in one of the most exciting Super Bowls ever. The vanquished 49ers had to exit the field as the purple and gold confetti fell on one of the most unlikely NFL champions ever. In one of our Super Bowl articles, our CEO said to “never underestimate what it means for a man to motivate other men.” Inside the 10 with just 1 minute to go, Ray got his guys to focus on those 4 plays. This team was flat coming down the stretch losing 4 of 5 to finish the season and it looked like another mid playoff exit was brewing.

Ray announces this would be his last go ’round and everything changed for the Baltimore Ravens. Cell phones were left out of meetings and players focused that much more on the game. The miracle double overtime win was one of the greatest in NFL history and one Flacco had to throw a 70 yard touchdown with less than a minute to go to tie it. In a year where former Owner Art Modell passes earlier in the season, OJ Brigance fighting ALS while working in the Ravens front office, Torrey Smith losing his brother and coming back to play for the Ravens with a heavy heart, they drew inspiration from within. Once Lewis admission to retire at the end of these playoffs and they were playing for something bigger than themselves. They needed every bit of spirit and motivation to upset the favored San Francisco 49ers by 8 yards.

The game won’t be the same without Ray Lewis but he leaves with another championship ring.