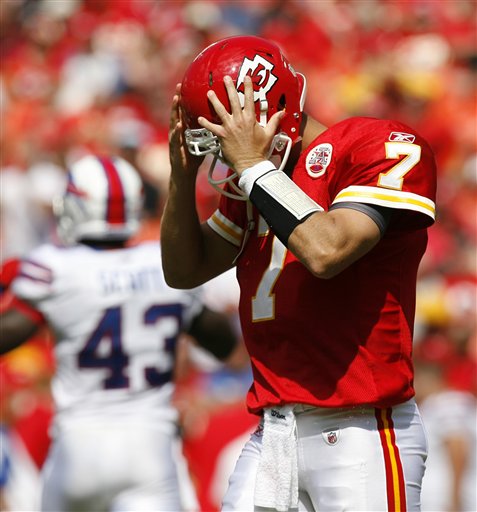 Matt Cassel is due to get released any day now.

Remember in 2010 when the Kansas City Chiefs were 10-6 and won the AFC West?? That was the first year Matt Cassel was the starting quarterback and the future looked bright with WR Dwayne Bowe his main target for years to come. Then Offensive Co-Ordinator Charlie Weiss left and the offense completely fell apart as Cassel regressed. Two losing seasons followed and both Head Coaches Todd Haley and Romeo Crennel got the ax.

The Chiefs finished 2012 with a 2-14 record and scored an NFL low 211 points on the season. In 5 of their last 7 games they scored less than 10 points which was pathetic. Sure they had some injuries but every team suffers from injury. Yet with the NFL’s 20th ranked defense, had they scored or just been middle of the road proficient they could have been a playoff team. What held them back?? Matt Cassel and Brady Quinn’s combined 8TDs to 20 interception season was the main reason this team was held back.

To KC after being supplanted in SF, Smith will have the landscape to himself.

Enter new Head Coach Andy Reid and newest Kansas City Chief Alex Smith. The San Francisco 49ers have agreed to trade Smith to the Chiefs once the league year starts. With this move Kansas City changes the landscape of the AFC West immediately.

The staple of the Andy Reid era in Philadelphia was his quarterback development. We’re not just talking Donovan McNabb, think back to the 2002 NFL season. In that year he coached AJ Feeley and Ty Detmer to a 5-1 record while McNabb recovered from a fractured ankle. That year they made the NFC Championship Game. In 2006 he coached an aging Jeff Garcia to a 5-1 record when McNabb was lost for the season and they made the playoffs winning a wild card game.

All this before we talk about the resurrection of Michael Vick’s career and the possible Hall of Fame career of McNabb, Reid develops quarterbacks and don’t forget his role in the ascension of Brett Favre’s career. Every quarterback that has associated with Reid has performed above expectations. He is the replacement to develop quarterbacks the Chiefs have sought since Charlie Weiss’ departure. He may be the best to develop quarterbacks in the last 25 years. Look at what he did last year with a rookie in Nick Foles??

Now Smith won’t look over his shoulder like he had to last year in San Francico. His replacement last year was thought by many, including The Chancellor of Football, to be an unfair decision. At the time he was outplaying Colin Kaepernick and finished with better stats than the man who replaced him. For 2012, A. Smith completed 70% of his passes for 1,737 yards 13 TSDs with 5 interceptions vs 62.4% for 1,814 yards 10 TDs and 3 interceptions. An uneducated fan will say “Yes, but they made the Super Bowl with Kaepernick” which is true but a total misnomer. They were already on their way there. In 2011 totally under Smith’s control they were 13-3 and lost in overtime in the NFC Championship Game. In that game he didn’t throw any interceptions. The same couldn’t be said for the 11-4-1 49ers that played in Super Bowl XLVII as Kaepernick did throw a 2nd quarter interception that held up comeback efforts. 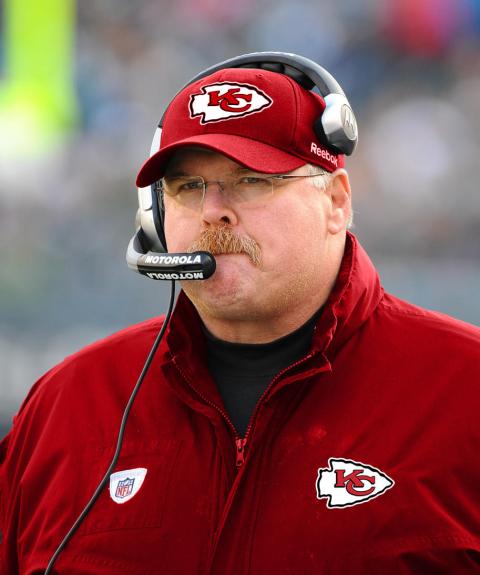 Andy Reid needed a fresh start and the Chiefs and Alex Smith will give him the tools to be successful.

Smith had come of age and was enjoying a decent 2012 and all hadn’t been healed from the 49ers letting him dangle in free agency while courting Peyton Manning. The only true reason he was replaced Russell Wilson’s success out of the pistol in Seattle. So the 49ers rolled over a plan last year that wasn’t going to take place until 2013.

Nevertheless Smith is free and will inherit a 1,500 yard rusher in Jamaal Charles. Kansas City has the #1 draft pick this year as well. He’ll have Dexter McCluster out of the backfield also. This could be the rebirth of WR Dwayne Bowe who was coming off back to back 1,000 yard seasons before last year’s 59 rec. 801 yard 3 touchdown performance. What will this team do with the first pick and what will the Chiefs attract in free agency with Alex Smith now in tow??

If Denver thinks the AFC West is going to be another cake-walk they had better think again. The Chiefs have a Head Coach in Andy Reid who has made the Super Bowl once and five NFC Championships total. He’s coming in with his quarterback in Alex Smith who helped the 49ers to last year’s Super Bowl and the NFC Championship Game in 2011. Don’t forget his signature win with The Catch III, the NFC Divisional Playoff win over Drew Brees and the Saints 36-32. https://taylorblitztimes.com/2012/01/21/nfc-championship-preview-alex-smith-coming-of-age/

The landscape has changed in the AFC West, with a few moves they could go from worst to first in a single year. Once the league year starts in March who will be attracted to Kansas City now that they have a coach, a quarterback, and a direction??

TBT = Taylor Blitz Throwback... I remember taking a quick look in the Sports section to see NFL transactions and ran into this: Tommie Smith selling his gold medal earned in the '68 Olympics where he and @[1733036766:John Carlos] made the most famous sporting event protest in history.
Man.... damn good hit @chidiahanotu you owe your boy @garrisonhearst a cup of coffee for this hit. 😎🤣 Digging through the archives for a Brett Favre highlight in 2001. Gotta get to work.
Football Friday- Taylor Blitz Times Flashback: Tied to tag you Adrian... @takeospikes51 you did rough Elvis Grbac and held Raven WR Travis Taylor earlier in the highlight during the goal line stand... but cuz you closed it out with the pick six! Super Bowl champion Baltimore Ravens first loss in 2001 in the 2nd week. #taylorblitztimes #cincinnatibengals #coreydillon #takeospikes #adrianross #dicklebeau
Alright Coach... want trying to cut your pick off. @coachcfuller24 Better edit
@coachcfuller24 going through old recordings... Y'all intercepted Ty Detmer 7 times? Damn. 1st game after 9/11. You got the 6th...Sept 2001
Loading Comments...