If there is one thing we learned from week 2 of the NFL, it’s that appearances are deceiving. Are the Seahawks as vulnerable as they appeared in a 30-21 loss to San Diego?? Have we begun to see the cracks in the 49er defense, after allowing Chicago to score 21 4th quarter points in a 28-20 loss?? Seriously if they lose to Arizona this week, they’ll be 3rd in the west??

Seattle Seahawks will be the 2014 NFC Champions.

Joining The Chancellor of Football in Glendale Arizona and Super Bowl XLIX from the NFC will be the Seattle Seahawks. They will renew their playoff rivalry when they beat the Atlanta Falcons in the NFC Championship Game.

With another Super Bowl title, Lynch could be building a Hall of Fame resume.

The Falcons went into the tank when they lost Julio Jones last year. They lost 6 games last year by 6 points or less. Not only do they bring back the big play with his return, now they have Devin Hester in the slot. This offense will be the scourge of the south. They just need to be adequate on defense and should finish with 12 wins.

Similar situation will happen in the NFC North. Not in Green Bay but in the Windy City. Marc Trestman’s offense in it’s 2nd year should roll with Brandon Marshall, Alshon Jeffrey, and Matt Forte. The Bears receiving corps is so imposing they could win hurt just running hooks against the 49ers last week. No intricate pass patterns and  they scored 21 unanswered points.

Yes you did read correct The Chancellor of Football doesn’t think San Francisco will make the playoffs. A knee jerk reaction to blowing a big lead in week 2?? No try Taylor Blitz’s NFC West Preview before the season. They will lose to the Cardinals this week and the pressure will build from there. 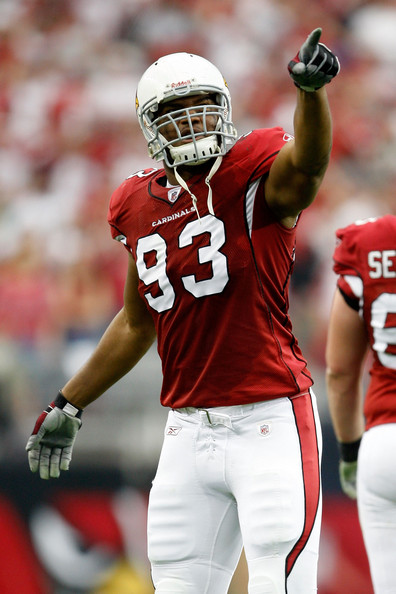 Calais Campbell has to come up big this season.

Which brings us to the Cardinals who will win today to start 3-0. A great start but the losses they took on defense will take it’s toll as teams develop game plans for this new personnel. They surprised San Diego in week 1 with cover 0 blitzes. In fact, on the last 3 plays to end the game. Last week they beat the back pedaling Giants who look lost on offense. They are masking their limitations at linebacker with all this blitzing. It will catch up to them. 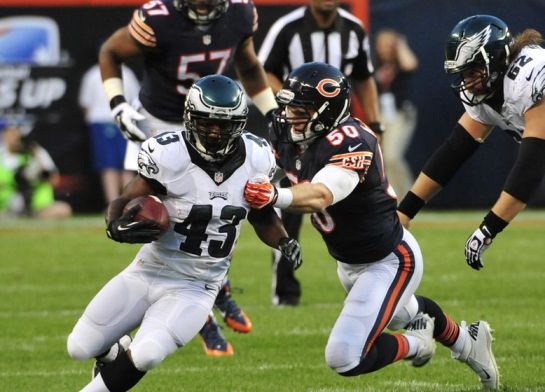 Sproles has been the sparkplug behindthe Eagles 2-0 start.

The Philadelphia Eagles will win the NFC East with the best personnel in the division. The acquisition of Darren Sproles will pay dividends all season. The inability to account for him has led to mismatches and huge momentum changing plays. These were the plays he used to make for the Saints when they’re offense bogged down.

Sproles change of pace plays are exactly what the Saints miss in the NFC South. Although they’re 0-2, they lost those games by 3 points and 2 points respectively. We’re only talking a few plays per game difference and they’d be 2-0. Sproles is /was that difference. Sean Payton is using Mark Ingram more in the passing game but he’s not the dynamic playmaker Sproles was. Brees and the offense will get it together despite the slow start. 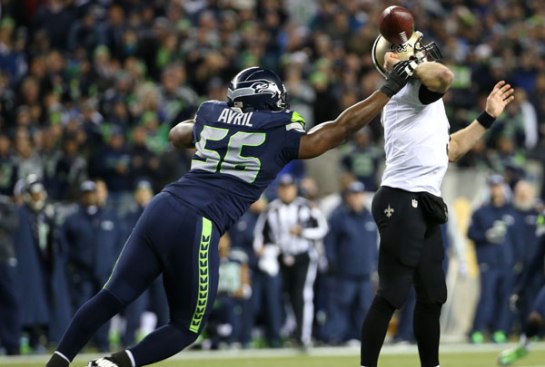 Last week the Seahawks learned what it meant to be the Super Bowl for every opponent they will face this year. The Chargers were crisp and physical in their offensive execution. This week they get to right the ship against the finesse Denver Broncos. One aspect of their defense this year is they need more heat on the quarterback. So far they have just 4 sacks and a 1-1 record. They will right the ship and should finish with homefield advantage.

@talkingsopranos @steveschirripaofficial @realmichaelimperioli Good luck gents! Good stuff
Quick selfie... working from home
TBT -Taylor Blitz Throwback
View from the top. Well one of them. This is facing Glendale over some nice houses by the water. Can you see Cardinals Dome stadium at 1 o clock??
Out hiking with @lesliebench .. so blue and gorgeous out here. Can see for miles and miles
You know... this smoothie just looks right for some reason😉😎