Today’s football game between the San Francisco 49ers and Kansas City Chiefs isn’t just another football game. The saga playing out will be the Alex Smith v Colin Kaepernick debate. Did the 49ers keep the right quarterback?? Most 49er fans think they did. Is that because they’re blind loyalists and wanted to move on with the new QB??

This has a similar backdrop to the 1994 game between the Chiefs and 49ers. In that one Steve Young brought the 49ers to Arrowhead to face his predecessor Joe Montana, now a Chief. However this one is taking place in San Francisco. Its a shame this game couldn’t happen at Candlestick Park with all the history.

For the record, The Chancellor of Football believes the 49ers kept the wrong quarterback.

Short sighted 49er fans forget that Smith drove Harbaugh’s first team to an NFC best 13-3 record. Then knocked off the Saints with “The Catch III” playoff winner to Vernon Davis in the final seconds. Smith didn’t lose that NFC Championship Game to the Giants. Those two muffed punts by Kyle Williams did them in.

In 2012 the 49ers were an established contender at 7-4, when Harbaugh made the switch to Kapernick. Smith said all the right things as he watched the 49ers make the Super Bowl. They lost that game to a superior team and the game revealed Kaepernick’s fatal flaw that still haunts him. 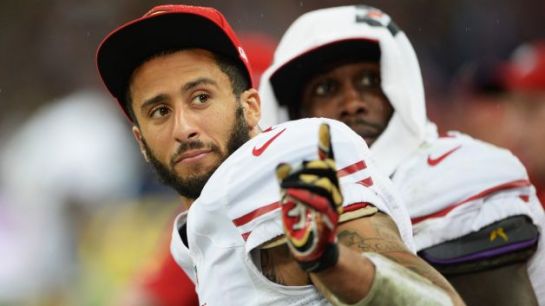 Kaepernick is dazzling when he runs but suspect when throwing.

He makes splash plays when he runs the football but hasn’t developed as a downfield quarterback. Watch his play. He can’t throw his receiver open to a designated spot in the defense, and relies on a straight path to drill the football to his receivers. In other words, he can only complete passes like a game of catch. He hasn’t shown the ability to throw on time and drop the ball in over the linebackers or the fade routes to Crabtree Richard Sheman was talking about.

This is why you see so many of his interceptions by defenders undercutting his throws. Think back to the Monday Night game against Chicago. Kaepernick hasn’t developed the touch that failed him on that final throw in Super Bowl XLVII, and is still throwing the same way. Relies too much on running and scrambling instead of allowing the specificity of the planned offensive play to take shape.

As these two went on separate paths, the 49ers went 12-4 and did make it back to the NFC Championship Game. Not only did Smith have a better record the year before with the 49ers but went 11-5 with a new team and new offense. Yes the Chiefs lost in the AFC Wildcard 45-44 but it was the most points scored by a team that lost an NFL playoff game ever. 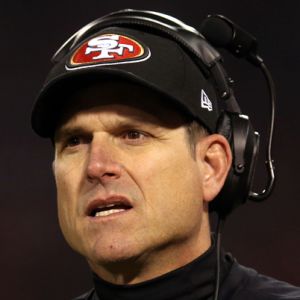 Is Harbaugh going to make it in San Francisco past this year??

Isn’t it ironic that after a week in which the NFL community is questioning whether Harbaugh has lost his locker room, here comes what ultimately could be his demise in San Francisco?? The Chancellor of Football told you before the season, Harbaugh will be out after this year.

Both teams are showing up to today’s game at 2-2 and Smith knows this defense pretty well. If you think this game doesn’t mean a lot to him, look at last week’s footage between the Texans and Bills. Before that game Ryan Fitzpatrick passionately told the Texans what beating his former team meant.

If you thought the buzzards are starting to circle above Harbaugh now, don’t let them lose this football game. By the way…Joe Montana and the Chiefs won that game in 1994 too.