When Larry Fitzgerald took off on his 75 yard reception in last week’s overtime win over Green Bay, how much did that play have to do with his legacy?? In The Chancellor’s view he may have played his way into the Pro Football Hall of Fame. 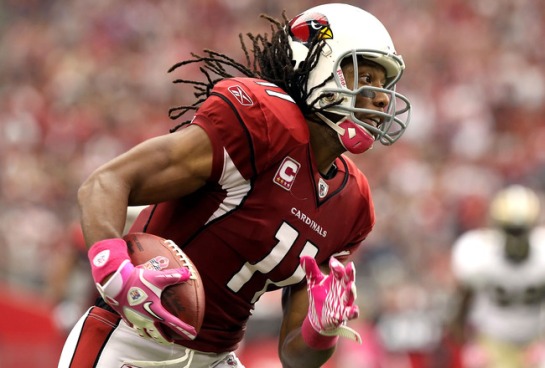 With the score tied at 20 in overtime, and league mvp candidate Carson Palmer at the end of a skittish performance, it was Fitz who made the decision to go win the game. Once he caught the pass you saw where he turned up-field and it looked as though he would head out of bounds at the 50. At that moment he turned back to the middle of the field, went by Clay Matthews and intended to win the game.

The flash popped in my mind immediately of his 64 yard touchdown in Super Bowl XLIII to take the lead with 2 minutes to go.  As though he was running for destiny. Who else to make that play?

Earlier this year, Fitzgerald was being interviewed on the radio when asked if he could put up the old numbers he once did now that he is playing in the slot. His answer was no and he was being honest. So now after a bounce back season in which he put up a career best 109 catches for 1,215 yards and 9 TDs… who else to make that play?

Today’s NFC Championship he will have to outfox Luke Kuechly and Thomas Davis. These ‘backers don’t come off the field and will clog Fitzgerald’s intermediate routes. If the Cardinals can isolate him on #20 Coleman, Arizona would have a match-up. With Pro Bowl corner Josh Norman out on Michael Floyd, Fitz has to come up big today to get his team to Super Bowl L.