Last year’s NFC East race was one that showed that football is a marathon not a sprint. Last year when the green and white crossed flags were waved the Redskins were dominating the division with a 5-3 record. By season’s end it was a resurgent Cowboy team that dominated winning 7 of their last 8 games. They leaped right over the defending champion Eagles and won the NFC East.

Yet here goes Jerry  Jones again with all the angst surrounding the contracts of Zeke, Dak, and Amari Cooper. How will this affect the team’s psyche at the outset of the season?? With Elliott holding out and Jerry Jones drawing a line in the stand, this stalemate will go into the season. Who will Jones sign first?? Will Jones sign all three??

This team has several young quarterbacks coming into the division in Dewayne Haskins in Washington and Daniel Jones in Gotham with the Giants. Each were 1st round selections which should be clipboard holding rookies although there were grumblings in NewYork wanting to see more of Jones after 1 exhibition game.

One season removed from their Super Bowl championship, the Eagles find themselves a team with a lot to prove. Can Carson Wentz fulfill the promise of his #1 draft status?? Many pundits credit the miracle playoff run of Nick Foles for the Super Bowl LII championship although Wentz had led the team to a 11-2 record before his injury. Speaking of which can Wentz finish the season upright?? Wentz has been knocked out ending the last two seasons on the sideline.

The Eagles lacked muscle and attitude in the running game once they lost LaGarrette Blount to Detroit. However the Iggles may have pulled a coup stealing RB Jordan Howard from the Bears in an offseason trade.

Carson Wentz will be the benificiary of defenses being bludgeoned by Howard and have a rebirth with All Pro Zach Ertz, Alshon Jeffrey and the resigning of deep threat DeShawn Jackson. This team will win the division going away.

Conventional wisdom has Colt McCoy headed to become the Redskins starting QB over 1st round pick Dewayne Haskins this season… conventional wisdom will get Coach Jay Gruden fired if it plays out this way. McCoy hasn’t passed the eye ball test since he was knocked out of the National Championship Rose Bowl vs Alabama.

Last year he was 0-2 in his starts completing just 34 of 54 for 372 yards 3TDs and 3 ints. This was on a team that started 6-3 where Lazarus (Peterson) rose to rush for 1,090 yards and a defense that finished 17th. Washingon’s defense gave up less than 20 points 6 times in their 1st 9 games then only once over the final 7. McCoy couldn’t win with or lift his team’s spirits then there is no chance of doing it now. Haskins has to play. McCoy’s NFL ceiling is that of a second string QB… Haskins?? Can become a Pro Bowl player if he gets in camp and shows he wants it.

A murderous 0-3 start facing Philadelphia on the road, then Dallas and Chicago at home should do the trick. Haskins would then start against the moribund New York Giants (24th ranked defense) with a bye week to follow. Haskins has these next 6 weeks to save Gruden’s job. Why not now with a veteran laden group and a power runner to take the pressure off?? 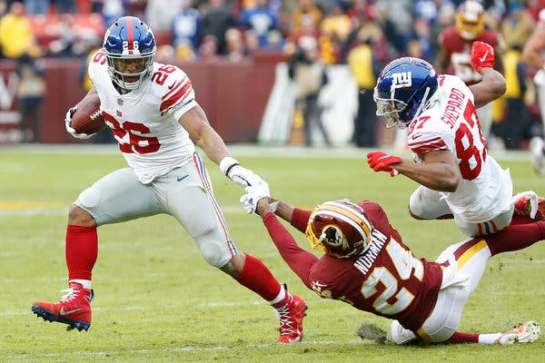 Over in New York it’s hard to watch Eli Manning age and fall into a QB controversy as 1st round pick Daniel Jones. The heir apparent should wind up holding a clip board all year as Manning has his final season where Jones can learn on the sideline. Unlike the situation in Washington, this team is in a complete restructure where playoff aspirations are out of reach.

The only talent in The Big Apple is Saquan Barkley who may have to dial it back a bit to keep from being overworked. A super back out of the Walter Payton/ OJ Simpson mode. Tremendous talent on a team where he is the sole focal point of an inept offense. The future isn’t now in New York…next year once they add some players they can make a move and insert Jones.