One year after Tom Brady parted with Bill Belichick and the New England Patriots, he won his 7th Super Bowl validating he had plenty left in his tank. Is it possible for lightning to strike twice?? After all this is the 1st team to return all 22 starters from a championship team in nearly 40 years. In most football circles the Bucs are the talk to make it to Super Bowl LVI out in Sofi Stadium.

However The Chancellor’s crystal ball is focused elsewhere in the division. For once upon a time there was a quarterback whisperer at coach who resurrected the career of a former starter who hadn’t met expectations. Yes we’re talking about Sean Payton of the New Orleans Saints and no we’re not talking Drew Brees. We’ll get to that…

Tampa has to absorb every team’s best effort as they were forced to in the 31-29 opener against Dallas. In the next 7 weeks Brady, Gronk, Evans and the Bucs face 3 of the top 11 defenses from 2020.  Two of which are on the road where they face last year’s #1 ranked Rams with Aaron Donald and the Saints defense which finished 4th.

In two of others, they face the Patriots on the road who finished #1 in defense in 2019 before having 8 defenders opt out last year. The other is the Chicago Bears who sacked Brady 3 times and punished the offense on a Monday Night winning 20-19.  Ohhh… check that former Taylor Blitz Defensive Player of the Year Khalil Mack sacked Brady on 3 occasions himself:

We had to remind you more than just Super Bowl LV was played and the Bucs offense has been bullied before. Other pundits have blinded you with ridiculous talk of the Bucs going undefeated but the fire breathing defenses the champs will face in these first 8 games will ensure 3 to 4 losses by the midway point. These teams will be taking their best shots when relatively healthy.

Heavy is the head that wears the crown and the offensive line will see former DPOY in Mack, Aaron Donald and throw in a Cam Jordan of New Orleans for good  measure. This offensive line has several sleepless nights coming this fall. These teams also reflect 4 of Tampa’s losses last year.

What will keep Tampa afloat and spur on a late season surge is Devin White and their 6th ranked defense. Between White (140 tackles/9 sacks) and Lavonte David (117 tackles /3 f.fumbles) this team has the most active set of linebackers in football. Once you combine DT Vita Vea, and interchangeable OLBs Jason Pierre Paul and 2019 Taylor Blitz Defensive Player of the Year Shaq Barrett this might be football’s best front 7. The Achille’s Heal is the play and health of their secondary.

Tampa will make the playoffs and have a chance to defend their title.

However there is a serious threat within the division seething over the Bucs hoisting the Lombardi Trophy last year. Its the New Orleans Saints. Fueled with the knowledge they had swept Tampa last year and former Bucs LB Kwon Alexander and QB Jameis Winston had to eat it and watch their former team become champions without them.

Furthermore this group still hasn’t gotten over the horrible non interference call in the 2019 NFC Championship vs the Rams, or the Minneapolis Miracle in another heart breaking playoff loss in ’18. Sean Payton, Winston and everyone within that organization believe the Bucs stole their trophy last February. Sending Drew Brees, the NFL’s all time leading passer into retirement without a 2nd championship.

Yet when you really take a look back an older Brees just couldnt throw the ball deep anymore and that allowed Saints opponents to clamp down on all patterns under 25 yards. 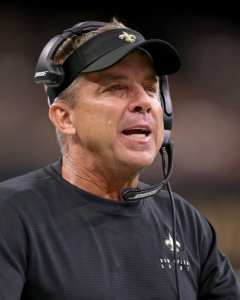 Its up to the quarterback whisperer Sean Payton to work his magic a 3rd time. A 3rd time?? Yes… a 3rd time. Payton’s greatest work in sculpting a championship quarterback came before Drew Brees. Remember Kerry Collins??

Collins teamed with KiJana Carter on an undefeated Penn St team from 1994 and Kerry was the 1st franchise QB for the Carolina Panthers. Their 1st ever draft pick. He had moderate stats playing for a defensive minded Dom Capers in a conservative offense. They made the ’96 NFC Championship led by the late Kevin Greene, Lamar Lathon and a blood thirsty defense. Collins only threw for 14TDs that season.

Collins flamed out and after a series of personal battles found himself with a young offensive coordinator named Sean Payton in New York. Under his tutelage, Collins went from averaging 2300 yards per season to 3800 over 3 seasons. The crowning gem was the 2000 NFC Championship Game where Collins who was never expected to be a great pinpoint passer, set records for 1st half points, passing yards and passing TDs with both 4 in a half & 5 in a game. It was Payton’s masterpiece as Collins threw his 5th TD with 12:52 left in the 3rd quarter and the Giants were up 41-0 and began to remove starters. Collins could have thrown for 11 TDs in that game it was that lopsided:

Only Collins and Sid Luckman have thrown 5TDs in an NFL or NFC Championship Game… from 1933-2021.

We have to apologize as we had to lend visual context to understand how spectacular a passing performance Collins put on under Payton’s guidance. Then go through the NFL’s All Time leading passer in Drew Brees and now you come to Jameis Winston.

Winston is clearly a greater passer than Kerry Collins as he was a Heisman Trophy Winner at Florida State when he threw for 4,000 yards and 40TDs as a freshman. Yes a freshman. Remember him winning the National Championship in front of 110,000 out in the Rose Bowl to conclude that year?? Funny how the media …keeps forgetting to show that yet I digress.

What will Sean Payton be able to sculpt as he has a 5,000 yard passer with 30TDs in his last full season from Winston?? If Payton could reach NFL record heights with Brees, championship heights with both Collins and Brees what can he do with … hold on…. wait a second… “this just in” *Ahem* Jameis Winston throws for 5 touchdowns in a 38-3 drubbing of Green Bay!

Where was I? New Orleans will win the NFC South and the question is how far can Payton go with Winston?? Alvin Kamara will have a 1,000/1,000 yard season now that Latavius Murray signed with Baltimore. By the time teams begin to figure out New Orleans Payton will decide what to do with NFL single season reception record holder Michael Thomas coming off injury.

Just watched Rod Woodson - A Football Life. Great episode. Remember when he made the NFL's 75th Anniversary Team and '93 NFL Defensive Player of the Year. Great player... The left side of that Blitzburgh defense. "Greene get your ass out to the flat quicker" LOL
Added Von Miller to my Bruce Smith purchased at Rich Stadium when Buffalo played Dallas Sept. of 1996. My autographed Thurman jersey, Super Bowl XXV Thurman throwback and an old Willis Mcgahee 2003 jersey and present day Bills helmet. Go Billz! Get to Super Bowl LVII! Here in AZ waitin on ya... #Billieve #buffalobills #buffalobillsmafia #brucesmith #willismcgahee #thurmanthomas #believepersistconquer #taylorblitztimes
"Hi Nike customer service? Yes, I ordered 100 Von Miller jerseys and only received 1. LOL sigh... @vonmiller ...The Chancellor of Football and right here 10 miles away from State Farm Stadium where Super Bowl LVII will be played this year.
Keep in mind Im the guy who loved Brett Favre's play. Wrote articles in support of him vs Packers brass when there was a chill after his retirement. Had goosebumps recording the "Go Pack Go" chant from the floor of the stadium at The Hall of Fame ceremony that I posted several times... so dont at me like I dont have a history of huge support of Brett... but
Gotta check out Andor!
Loading Comments...