As The Chancellor of Football, it’s imperative the history of the NFL and AFL is preserved and showcased for future generations. A best friend to Taylor Blitz Times has been Chris Burford. Not only was he the starting wideout for the Kansas City Chiefs in Super Bowl I, he was the first player signed in the history of the American Football League. He also suggested a great book to me last year. The Ten Gallon War which covered the days when the Chiefs / Dallas Texans battled the Cowboys for the heart of Dallas.

At the end of the highlight for Super Bowl I, he’s the one who puts on the Cowboy hat and heads out as John Facenda’s voice offers “In another year it will be the turn of the AFL. But this first spectacle of a sport belonged to Green Bay.”

These words echoed in my mind when Chris commented on an article which was the earlier incarnation of one I did on the ’66 Chiefs here.

“The major press were all in the NFL’s corner and denigrated our teams throughout the 60′s…however, when all was said and done after 10 years and 4 Super Bowls, the score was AFL 2 NFL 2…..(Chiefs 1-1), and the football world knew we could play with or against anybody….was a great time in pro football and a joy to have played in the AFL, from the beginning and through the emergence of the league….John Facenda, the Sabol’s, Pete Rozelle, Sports Illustrated, and the NFL propaganda machine notwithstanding.”

I thought it would be fitting to share with Chris one of my older archives where the late Steve Sabol had the late John Facenda narrate The History of The AFL. It’s told in a very respectful vain. The importance of this is even in the highlight for Super Bowl III, NFL Films narrated it with an NFL slant. Steve Sabol some time around 2000, later apologized for it. Going over the top about “One more moment for the master”- John Unitas trying to bring the Colts from behind instead of focusing on Joe Namath, the AFL, and the Jets victory. Which further validates Chris’ point.

So without further adieu lets take you back to this gem recorded in 1987 yet was produced in 1982.

Unfortunately I started two a day practice and didn’t get the other two shows recorded. What most folks don’t understand is there is still a battle between the AFL and NFL. For those that were there, some like Al Davis, didn’t want a merger. Others went on yet have their memories intact of the 10 year war and are fighting to be remembered and recognized. How the late DE Jerry Mays and FS Johnny Robinson were on the All Time AFL team, yet not in the Pro Football Hall of Fame, are glaring omissions.

Websites like mine and Todd Tobias’ Tales From The American Football League  and esteemed AFL historian Ange Coniglio’s Remember The AFL do what we can to recognize these players.  I know this doesn’t totally make amends Chris but something I wanted to share this Memorial weekend. 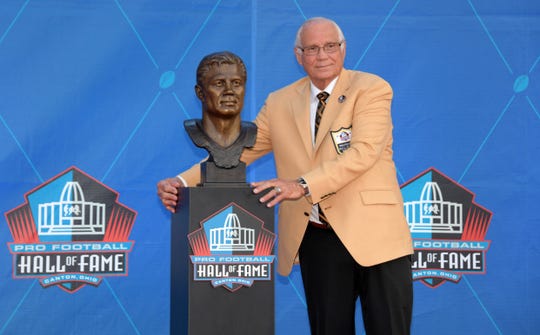 Postscript: 3, December 2019:  Last August, the Pro Football Hall of Fame inducted Kansas City Chiefs great FS Johnny Robinson (finally) for his contributions to pro football back in the American Football League. An honor long overdue and ironically every time Chris would interact and talk about great players of the past, not one conversation would go by without mention that Robinson belonged in Canton. Not one.

I was unable to attend the PFHoF ceremony in 2019 however I did run into Robinson’s teammates and fellow Hall of Famers Willie Lanier and Emmitt Thomas after the 2018 Gold Jacket Dinner in Canton.

On the day Robinson was to receive his Hall of Fame ring during a half time ceremony earlier this year, here is what graced the PFHoF Instagram page:

Again Chris it doesn’t totally make amends but know you pioneers haven’t been forgotten. Raising a glass to toast you all.

Super Bowl IV in ancient Tulane Stadium, the scene for Kansas City’s 23-7 win over the Minnesota Vikings in the last ever AFL game. The merger followed this game and to have the score after 4 games: AFL 2 wins, NFL 2 wins, was poetic justice since the two leagues battled for a decade. So many ironies during this era it’s hard to choose where to begin…but we have to start somewhere right? 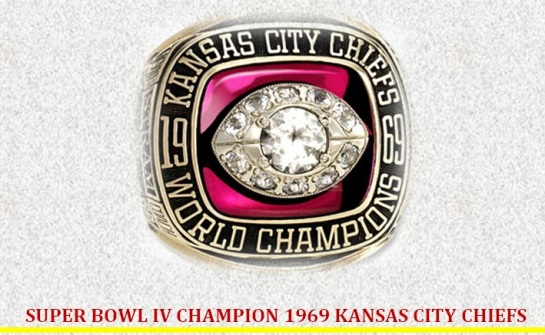 We’ll start with an epilogue I posted with the 1966 Chief’s AFL Championship ring on the origins of the Kansas City Chiefs and the Minnesota Vikings and the irony of those two teams facing each other in the last ever game of the AFL.

The AFL was originally going to have a franchise in Minnesota and in a move of espionage out of James Bond, cold war, double agent dealing, the NFL told the owners of that franchise to stay quiet and at the last minute award them an NFL franchise in 1960 to try to sink the new league. The AFL couldn’t’ operate with only 7 teams. Fittingly the last game in the history of the AFL, Super Bowl IV, Kansas City beat Minnesota 23-7 to offer some payback.

What happened to the team that would have been in Minnesota you ask? They went west and became the Oakland Raiders the Chiefs main rival. As irony would have it, they too bested Minnesota in a Super Bowl winning the 11th edition 32-14. So when you think of the Vikings of the 70’s and their 4 Super Bowl losses, karma caught up to them for what happened in 1960…folks I can’t make this stuff up.

This game was significant because NFL loyalists still weren’t giving the AFL its due after the crushing loss in Super Bowl III. Thought it was just a fluke. One of the great things about the AFL was its close camaraderie between the players and teams, knowing they were only part of an overall league fighting for their respect. They each played their part and they represented their league.

Joe Namath recalled when the New York Jets returned to their hotel after beating Baltimore in Super Bowl III, he could remember being greeted by Emmitt Thomas, Buck Buchanan, and Willie Lanier (Chiefs) as told on HBO’s History of the AFL circa 1995. Len Dawson (Chiefs QB) was also in the stands for the Jets monumental win over Baltimore so to have this group carry the banner into the last Super Bowl and last game in the AFL’s history had personal weight, league-wide weight, and TOTAL legitimacy for the AFL’s legacy with another win.

The Minnesota Vikings had departed with Fran Tarkenton and brought Joe Kapp (California Bears) from Canada to play quarterback. He threw ugly passes and played football from his gut and as a fearless leader who avenged a playoff loss the year before against Baltimore. In 1968 the Colts were regarded as the greatest team with the greatest defense ever. The Colts beat Minnesota 24-14 in a divisional playoff match where they sacked and hit Kapp repeatedly.

In 1969, game 2 he threw for a record 7TDs in a rematch with the Colts to wrest the NFL dominance mantle from them winning 52-14. The Vikings went on to finish the season on a 12 game winning streak and break the Colts 1968 defensive record of 144 points allowed with 133. The 12 game winning streak to finish the season was the longest the NFL had seen in 35 years. Yikes, they were steamrolling to the Super Bowl…all they have to do was win this last game.

Kansas City, like Green Bay before them resembled what future NFL teams would look like. That defense with Willie Lanier, Bobby Bell, and Jim Lynch at the linebacker spots. Two that are in the Hall of Fame (Bell and Lanier…in fact Bobby Bell was the first outside linebacker inducted into the Hall of Fame) and one that should be in Jim Lynch. Jim Marsalis, and Emmitt Thomas at the cornerback spots. To imagine Emmitt Thomas, think of a little lighter Mel Blount. Johnny Robinson and Patrick Kearney were interchangeable safeties.

Then you have the front four: Aaron Brown, Jerry Mays (AFL all decade team member), Buck Buchanon, and Curley Culp were as physical as the Steelers of the 70’s with less notoriety because they played in the AFL. They made it to the big stage this day. All this before I get into Hall of Famer Len Dawson and WR Otis Taylor who should be…then versatile Mike Garrett, Warren McVea, and Robert Holmes running the ball as a group. This was a complete team and one of the most powerful Champions ever.

Thanks for reading and by the way if you wanted to see Super Bowl IV in its entirety, click the link “Super Bowl IV” at the start of this article.

Greatest Ever Defenses... #2 -2000 Ravens
Courtesy of the Black College Hall of Fame on display in the Pro Football Hall of Fame... The "Roos" the late Walter Payton was wearing when he passed Jim Brown to become the NFL's All time leading rusher back in 1984. Richard Dent's game ball from Super Bowl XX #taylorblitzarchive #HBCUs #JacksonState #TennesseeSt #WalterPayton #RichardDent #keepthebearsinchicago
Tell The Truth Tuesday: Taylor Blitz was even the first to suggest he would take Carson Wentz's job months before he did. Even with a former Eagle telling me I was crazy for suggesting it. LOL Well... The Chancellor nailed that one too with Jalen Hurts
Tell The Truth Tuesday: When the Philadelphia Eagles win the NFC Championship Sunday the national media Super Bowl stories will start and begin with Jalen Hurts. Didnt Taylor Blitz Times step up to the plate and say why he was a better draft choice than Nate Stanley (who?) Jacob Eason, Jake Fromm, Tua, and Jordan Love where Athlon and ESPN had Hurts 8th or worse??
Loading Comments...