In the annals of college football there was a time where USC had earned the moniker “Tailback U”. Then in the late 80s Oklahoma St churned out back to back Pro Football Hall of Famers Thurman Thomas and Barry Sanders. Yet go back another decade and you’ll have a hard time topping the talent Auburn sent to the NFL over a 10 year period.

From 1979 -1989 William Andrews, Joe Cribbs, James Brooks, Lionel “Litte Train” James, and Bo Jackson took the NFL by storm. While each touched a level of greatness during this era none would make it to the hallowed halls of Canton. Although injuries derailed 2 of these promising careers right at their zenith. 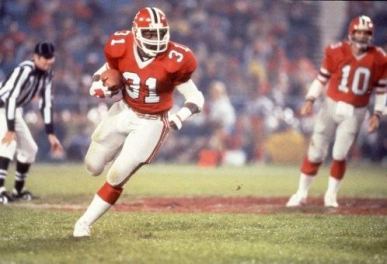 Of this list most think of Bo Jackson as the leading ground gainer who lost his prime to an injury. Not true the 1st of our super backs who had their career cut short was the punishing William Andrews. He’s the man that began this era of excellence unexpectedly as a 3rd round pick by the Atlanta Falcons in the ’79 draft.

To offer some context consider Andrews was the powerful fullback blocking for the shifty and elusive Joe Cribbs and James Brooks. In ’78 Cribbs led the Tigers with 1,278 yards while Brooks spelled him gaining 514 more. Andrews was the 3rd choice with the fewest carries at 72.

He exploded onto the NFL scene rushing for 1,023 yards in his rookie campaign in ’79. Then followed it up with back to back 1,300 yards seasons in ’80 & ’81 yet came to be known as the running back who once knocked out Hall of Fame hitter Ronnie Lott. We don’t have that hit but we do have one encounter on a Monday Night fans everywhere remember during that era…

By 1983 Andrews had supplanted Hall of Fame Member Earl Campbell as the NFL’s premier power back. His ’83 rushing total of 1,567 yards stood as a team record until Jamal Anderson broke it in 1998. He was 2nd in the league in rushing to another Hall of Famer Eric Dickerson. It was the 2nd time Andrews gained over 2,000 yards from scrimmage in 3 years. Yet he was derailed with a knee injury that shortened a potential trip to Canton.

Take a look at how lethal he was both running and receiving from 79-83.

In ’80 Cribbs blossomed into the AFC’s Rookie of the Year as he was the sparkplug in the Bills 1st division championship dating back to 1966. Cribbs juked his way to 1,185 yards rushing 11 TDs while gaining another 415 yards on 52 receptions. Quite simply he was Thurman Thomas before Thurman Thomas as he was a threat out of the backfield. He tortured linebackers trying to cover him.

Check out the move on the 1st vid at the 2:32 mark when he rushes for a 16 yard TD against New England. He makes 4 unblocked Patriots miss in a phone booth… just sick…

While being a Bills fan up close, it’s hard to choose between his rookie year or his 2nd year as his best. Both years the Bills were in the playoffs and in ’81 he rushed for 1,097 yards and only 3 TDs but made up for it with 7 TD receptions and another 603 yards on 40 receptions. He flashed on big play after big play as a the Bills rose to prominence challenging the NFL’s elite.

Amazingly Cribbs and Andrews were rarely used as receivers at Auburn and they’re game fully maturing on the NFL level is what elevated both. Auburn in ’78 completed just 5 passes a game in a run heavy offense.

Ironically this was the role James Brooks also found himself as the 3rd down back in his rookie season with “Air Coryell” in ’81. Chuck Muncie was the feature back and he scored an NFL record 19TDs rushing. Brooks was the change of pace scatback who recorded 46 receptions for 329 yards and 3 TDs and had to fit in where he could. He only ran the ball 109 times for 525 yards but had a whopping 4.8 yard average.

He was the AFC’s leading punt returner in 1981 and led the NFL in kickoff return yardage in 1982… so of course you’re asking “How is that dominant at the pro level?”

With a potential contract dispute looming, he was traded to the Cincinnati Bengals in 1984. His 2nd season in the Queen City saw him improve with 929 yards rushing and 7 TDs. Out of the backfield he caught 55 aerials for 576 yards and crossed the goal line 5 more times.

Over the next 5 seasons Brooks would make the Pro Bowl as a runner 4 times while being selcted All Pro in the same seasons. He had 3 1,000 yard season and in 1988 finished with 931 yards. Had he gained another 69 he and Ickey Woods (1,066) would have been just the 4th set of 1,000 yard rushers in the same backfield in a season. Brooks and Woods powered the #1 offense to Super Bowl XXIII that year.

His 1989 season of 1,239 yards rushing was the most in Bengals history up to that point. Corey Dillon broke it in 2000. Try this vignette:

So if you’re keeping score, between 1980 and 1990, these 3 running backs accounted for 11 Pro Bowls, 11 All Pro selections, a Super Bowl appearance (Brooks XXIII) and 10 – 1,000 yard campaigns. Each saw success as the Bills and Falcons twice made it to the divisional round of the playoffs and 1 trip to the AFC Championship Game with Brooks in ’81.

While these men were killing it on the NFL level, Bo Jackson and Lionel “train” James were the new set of Auburn backs to make names for themselves. James was thought of to be too small for the NFL standing at 5’6 and 171 lbs soaking wet. Yet he would have to make a name on special teams and spot duty in the backfield.

In a season where Roger Craig became the first 1,000/1,000 yard performer both rushing and receiving & led the NFL with 92 receptions out of the backfield. Guess who was 3rd with 86 receptions 1,027 yards and 6 TDs? “Little Train” James. He actually outgained the more celebrated Craig in yardage 1,027 – 1,016. This was an NFL record for receiving yards out of the backfield.

His reception yardage record didn’t fall until 1999 when Marshall Faulk broke it with 1,048. His all purpose yardage mark stood until 2000 when Derrick Mason of the Titans broke it. Do you realize James’ ’85 season still ranks 4th in history?? He’s been gone from the NFL 31 years. His last season with the Chargers was 1988.

His best game ever?? His 345 yard performance against the LA Raiders where he won it in overtime:

By the way… that was the 2nd most all purpose yardage in a game in NFL/AFL history. In a brief 5 year career… James could fly. His 1985 was so dominant that it changed the Pro Bowl voting as the following year special team kick returner was added to the vote. In 1986 Bobby Joe Edmonds of Seattle became the 1st voted in but we know who’s play created that spot. Lionel James! 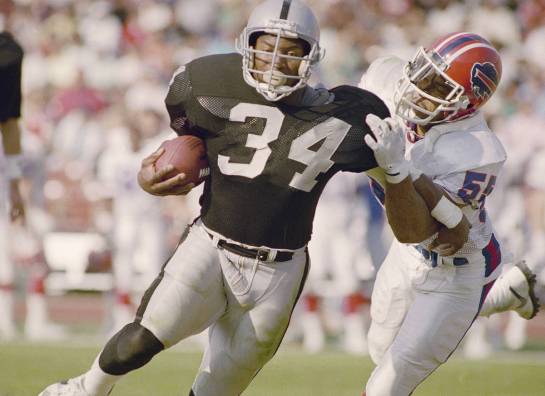 Bo powering past perennial all pro Cornelius Bennett of Buffalo.

Then we finish with the Heisman winning Bo Jackson. He was so great that 30 years later we’re still watching Bo Knows in a 30 for 30 documentary of what could have been. He shocked the world when he didn’t play for Tampa who drafted him in ’85 and we know of his baseball and football exploits. When he came back to “take on another hobby” in ’87 with the Raiders, it didnt sit well with a young Chancellor. It seemed arrogant and then we saw what happened on the Monday Night in Seattle:

Yikes! Bo can do whatever the hell he wants. To watch him just dust Hall of Famer Kenny Easley who had the angle on him… I was done. Apparently so was the rest of America. For the next 4 years every football season began with “When is Bo coming over from baseball?” He had other great games but not as electric as that Monday Night.

In 1990 Bo Jackson became the 1st backup to ever make the Pro Bowl as he ran for just 698 yards and 5 TDs. League wide respect poured out over what he could do if he turned to football full time. He was an adonis with sprinter speed that made the best athletes in the world view his exploits in awe.

But alas … we never saw Bo get to full potential as he went out with a fractured and dislocated hip in a 1990 AFC divisional playoff against Cincinnati. He never played again.

None of these men will make the Pro Football Hall of Fame but each left an indelible mark on the NFL of the 1980s. They arrived on the scene and turned lesser than franchises into teams that contended for championships. What was remarkable was how complete these backs were catching the ball out of the backfield when they rarely exhibited this in college.

This was one of the great runs from one school in NFL history. Even USC’s best was really OJ Simpson and Marcus Allen. Two Hall of Famers that came out 12 years apart in ’68 and ’81 respectively. Not a series of game changing backs.

To think that 3 players out of the same ’78 Auburn Tiger backfield, Andrews, Brooks, & Cribbs would go on to produce 27,771 yards from scimmage and 162 TDs in the NFL is nothing short of brilliant. Especially with Andrews and Cribbs having brief careers.

An era of dominance to be remembered for all time.

Just.... lol
Mama Kelce in the pre show...
What do you mean no one you would t trade for Derek Carr or Aaron Rodgers??
Alright Tom Brady... we need to talk. No no... stay on that side of the room. LOL and put some pants on.
Uh uh!! Hassan Reddick screaming off the corner and knocking Brock Purty from the game isn't luck. Stop it...
Loading Comments...