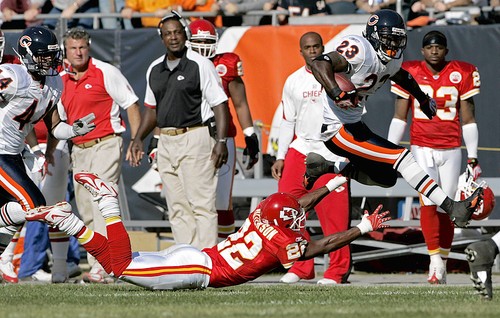 Devin Hester on one of his electrifying returns against Kansas City

The NFL is blowing it with this with this new rule change. A good kick return raises the hair on the back of your neck when it gets to that point where the returner is on the verge of breaking one. What is interesting is this rule reverses the 1994 decision to move kickoffs from the 35 to the 30 yard line to generate more excitement. Over these 17 years there have been many dynamic returnmen. From San Diego’s Andre Coleman to today’s Devin Hester (the U), you made sure your ass was back from the refrigerator to catch the kickoff. Now take the extra few minutes, you’re only going to miss a bunch of touchbacks.

In 1993 league brass responded when they heard fans explain why they liked the college game better. It was more exciting with the wide open offenses, kick returns, the two point conversion, the 1 point if the conversion was returned against you. Every element of the game had to be watched and lends an excitement when thinking ‘what is your team going to do in a given situation’. The NFL in contrast had a majority of their kickoffs flying out of the endzone having drafted all the top legs from the collegiate ranks. Where most teams have specialists just to return kicks, back in 1993 teams had specialist kickers just to kickoff!! Remember Brad Daluiso?? He made a career out of the fact he could boom the ball 70 yards on kickoffs http://www.pro-football-reference.com/players/D/daluibra01.htm. Notice his early career numbers for actual field goals. In the 1993 finale between the New York Giants v Dallas Cowboys, made famous for Emmitt Smith’s playing with a separated shoulder. The Giants had come from behind to cut the score to 13-10. Then on the ensuing kickoff Daluiso’s kickoff was so extreme that Cowboy kick returners Brock Marion and Kevin Williams (The U) stood in the middle of the endzone, as the kick was still 40 feet over their heads and hit the Meadowlands wall. The NFL wants that back??

So the NFL adopted the 2 point conversion and moved the kickoffs back from the 35 back to the 30 yard line with the sole purpose of generating excitement. What a noble concept?? What is the reversal of that going to do??

We here at Taylor Blitz Times are all about player safety but at some point you can’t take away the spirit of the game. Its still a collision sport!! Rules have been modified over the last two years to eliminate wedges on kickoffs. Moving down to just two people running interference before a kick returner in a tight formation instead of five. Therefore this eliminated the wedge buster, the kamikaze player whose sole purpose on returns was to violently throw himself at the chain of blockers in an attempt to strip the returner of his interference. We saw horrific injuries like Kevin Everett’s of Buffalo a few years back and that rule change was a good one. We saw less injuries on kickoffs over the last few years with more one on one area blocking on special teams.

This is a knee jerk reaction to the concussion epidemic and player safety awareness that is permeating the league right now.  Rules need to be enforced where players aren’t leading with their heads (spearing) as they collide with another player. Ejections and fines for doing so will straighten that out right away. Yet eliminating the kickoff from the pro game is what will happen. Look at the advancements in workout regimens and body building supplements over the last 17-20 years. You don’t think kickers have gotten stronger?? If they were booting them out of the endzone in 1993 which precipitated the rule changes of 1994, what do you think will happen now??

Between Super Bowls I and XXVIII (1-28 for the roman numeral impaired) there were only 2 kickoff for touchdowns, where from XXIX-XLI (sigh…29-41) there were five. Who could forget the back to back kickoff returns in Super Bowl XXXV between the Ravens and the Giants?? That was the most exciting point of that game. Or the electrifying start to Super Bowl XLI when Devin Hester blew by Adam Vinatieri and the Colts special teams on the opening kickoff?? Speaking of Hester, many pundits and experts believe that this is a rule change to limit Hester’s effectiveness for the Bears. We believe it as well. This eliminates the edge that the Bears had on their NFC brethren in special teams which could be born of their unexpected run to the NFC Championship last year.

The NFL needs to change this rule back to the one that was altered to add excitement to the game, not eliminate it. Vince Lombardi said that “football is a game of blocking and tackling.” So tackle the kick returner, don’t legislate his effectiveness into watching him down the ball on 50 % of his opportunities. Wake up!!