When pictures of the abandoned Silverdome surfaced on aol.com this week, it struck a nerve with everyone The Chancellor interacts with. Of course all of us pictured so many Thanksgiving Day games, Barry Sanders breaking ankles, and the incomparable Billy Sims flying high into the end zone. However sandwiched between these two was a fullback who was a #1 draft pick in James Jones.

The Silverdome as it exists today. Almost a scene from the show “Life after People”

In the vignette to follow, you’ll see Jones was forced into a bigger role with the Lions although the team was lacking in talent to fully showcase him. Had QB Chuck Long developed fully or Eric Hipple able to avoid injuries, the offense could have gotten on track.

They just didn’t have the talent at receiver to stretch the field and provide more running room. Not a single Pro Bowl performer on offense between 1983-1988 slowed what could have been an even more productive career.

As twilight is descending on the Silverdome with all of it’s assets being auctioned off, why not take a look back at James Jones career. His name should be thought of with the best Detroit Lions who played in this building. Yes Super Bowl XVI was played here but these men toiled on the floor of this stadium trying to bring Detroit a winner. 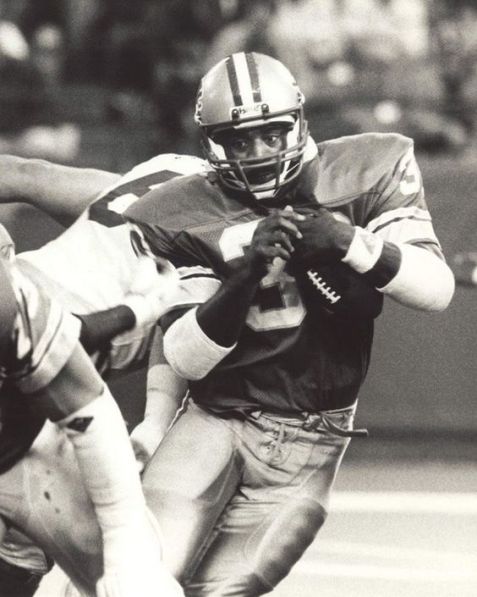 Jones had the talent to be one of the best fullbacks in league history. When you play for a team that is always behind it’s hard to get rushing totals to be considered among the elite. Players like Jones are overlooked when playing for incomplete teams that lose most of the time. That has to be frustrating. Its worth taking a look back and think what might have been as the Silverdome fades from memory.

Although he played 10 seasons the bulk of his career yardage came as the link between Billy Sims and Barry Sanders.

These are nowhere near what the more celebrated #20s accumulated but when you look at his play among the pantheon of fullbacks, you have to tip your cap to the career he had.