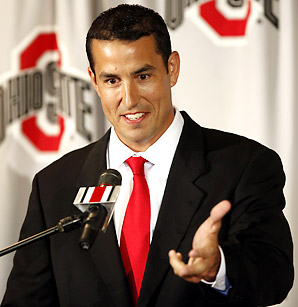 After a tumultuous season in Columbus, the Ohio St Buckeyes concluded their Big Ten regular season with a loss to Michigan. The loss ended a seven year reign for the Buckeyes in this signature game and the end of the run for Head Coach Luke Fickell. What was terrible is the fact that they brought him in to be a lame duck coach after having served at OSU as a player and assistant for several years. They made the decision to elevate Fickell, who played nose tackle from 1993-1996 for OSU, to head coach amidst the allegations and subsequent dismissal of Jim Tressel.

In one of the season’s most spectacular games, the Buckeyes fought tooth and nail with the Wolverines, who were desperate to reverse their fortunes in this rivalry as of late. This 40-34 game has to be one of the best ever in this long rivalry and illustrated how much fight the players had for Luke Fickell. He was in over his head having to replace such a legendary coach and replace such a celebrated quarterback. The Buckeyes would have served him better if they had anointed another as interim coach. Fickell is and was an upcoming asst. coach through the Buckeye ranks in his own right. At first they wanted him to be interim coach until pressure forced Tressel to resign.

Ohio State as a university should have been more fair to Fickell and not appointed him to the interim position knowing they were going to go after a bigger fish to coach the team. Why put a blemish on his collegiate coaching career this early?? If you knew you were going to go after Urban Meyer all along why string along one who played and served you the right way?? It was a chance for Fickell to excell but it was a little early for him to take on his first head coaching position in this way. He had to close ranks in a hurry and even contacted his former OSU teammate Mike Vrabel to aid in leading their alma mater. Vrabel, who has won 3 world championships with the New England Patriots, was the veteran leader of the Kansas City Chiefs who chose to retire to coach with Fickell. Yet a recently retired Urban Meyer, who had just purchased a home in Dublin, Ohio to rest his 2 National Championship trophies on would cast a shadow over Fickell with each loss.

For those that don’t understand, Columbus, Ohio IS Buckeye football. Business owners and many businesses shut down during Buckeye football games. Over 100,000 of a community of less than a million are in paid attendance at Buckeye home games with another 15,000 working around the stadium as vendors and such. Our CEO recounted selling programs before games and even a season ticket holder for 1980. In fact, working at a Jeep dealership in Columbus, there were straws drawn for who was to cook what, bring in a television, or chairs, with the understanding they were going to watch the game with NO customers that day. Every move and game is scrutinized to the enth degree and consumes those who live in Columbus. Fickell, being born and raised there knew all about it yet was he prepared for it??

After a 6-5 season the answer would have to be no. However had he a legitimate chance to recruit, without the stench of scandal, we don’t know how good he could have been. With this move did the Ohio State University place the chances of his legitimate candidacy as head coach elsewhere in jeopardy?? They could have done his chance at being a head coach a serious disservice with this one year as coach to highlight ALL of his shortcomings before he was ready. Ohio State thought nothing but for themselves in this situation and treated a son, who grew up in the shadow of “The Shoe” and attended DeSales High School some 10 miles away from OSU, as a pawn in a larger game.

Then you have Urban Meyer. The coach who retired amidst health reasons and wanted to spend time with his family nonsense, then proceeded to travel the countryside for ESPN in his 1 year off. Are you kidding?? Then with every time there was a loss or question about Ohio St’s play, who do you think they would ask, living right there in a Columbus suburb?? Meyer would give his “aw shucks” comments about what could have been done and alluding to his being retired as though we didn’t know the situation. OSU was orchestrating this all along and it’s come to a head and Meyer still hasn’t confirmed it…yet we know better. Last Friday, before the OSU game here is what came to Taylor Blitz Times from a reliable source.

This came across our newsdesk late last week……..

Job opening was to be posted yesterday or Monday per State/Federal regulations – announcement expected next Tuesday @ OSU vs. Duke basketball game!!

So it’s at this time that Coach Fickell who supposedly worked hand in hand with OSU in securing Fickell should take a step back and think of his own coaching career. There is a difference between service to Ohio State and being a disservice to your own aspirations. If he wants to be a coach for Ohio State it might be a ten year window from now. However once one sees you as a pawn, they’ll always look upon you in that regard. Don’t expect a second shot… For Urban Meyer, the one year hiatus of “Oh, i have to take time off for health reasons” bullshit shenanigans are out the window. He had to find a soft landing spot after the Tim Tebow is God mantra he helped foster at the University of Florida.

If Fickell really wants to be a head coach someday he might want to escape the dark side of the force that is Ohio St, Coach Meyer, and find his own path now. He has about a one year window with which he has a chance to go elsewhere to prove his own mettle and then become a successful coach. He may now have to step outside the sway that is Ohio State to achieve this…

At home chillin' watchin Super Bowl Opening Night day after attending the event. Super Bowl LVII ball in hand. Off and look forward to rest of the week #thechancelloroffootball #superbowllvii #taylorblitztimes #nfl
In the last 8 years, each team has won one. The Dick Vermeil/Andy Reid Bowl. Both coached in both places. Super Bowl LVII will be a great game.
Trent Dilfer on Bullies from Baltimore Sunday night: "The modern game doesn't impress me. It's so easy to play when you can't hit the quarterback or receivers over the middle or reroute receivers."
Just.... lol
Mama Kelce in the pre show...
Loading Comments...