There are multiple ways NFL teams overcoach. Some are merely lined up in formations that doesn’t suit their personnel. Others fail to include their best players often enough in their game to make a difference. Still others get away from their game plan too quickly in a knee jerk reaction to what is happening in a given game.

The Dez Bryant eruption on the sideline with fellow Cowboy Jason Witten.

Several of those manifested themselves in the Dez Bryant outburst toward the end of Dallas 31-30 loss to the Detroit Lions. We have often said “When you have a talent like this, you sick him on the defense 15-20 times per game.” Every great receiver has been selfish and wanted the football and at what point does “We’re trying to get you the ball.” fall on deaf ears??

On the week he proclaimed to be as good as Calvin “Megatron” Johnson. Bryant had to watch in disbelief as the Lions fed his nemesis 14 times for a club record 329 yards and a touchdown. We’re not talking about the game where Terrell Owens set the reception record of 20 on 5 yard passes. “Megatron” averaged 23.9 yards per catch!! Seam routes, bombs, deep in routes, every single play designed to get him in winnable situations. When it called for it, put the ball up where he at 6’5 can get it.

Well the 6’2 Bryant who said earlier in the week he could do what Johnson can do, made a circus catch on one of his two touchdowns. However it was his 3 catches and something said after a pass thrown behind him in the third quarter that set him off. Yet across the field he watched the Lions move Johnson from the “X”, to the “Z” when he caught the bomb, to the “Slot” where he ran several corner routes. To the final seam route from the “Y” position that put the ball in place for the game winner by Stafford. The Lions game plan called to do what was possible to get him the ball. All the while Bryant played decoy on 59 of 64 offensive plays for Dallas. 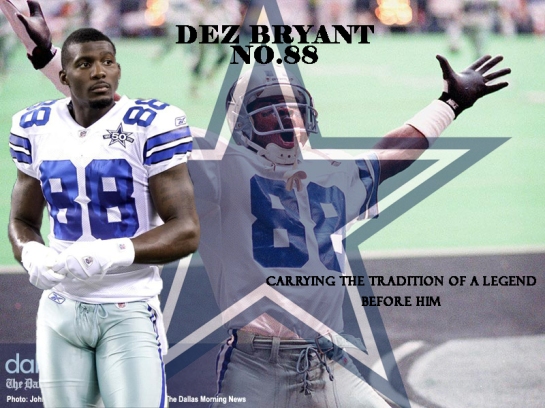 If Bryant is the top gun in your offense, why are you only targeting him 5 times?? You need to have your main player be at the heart of the offense in the waning moments. Not watching Romo throw erratically over the head of Cole Beasley with 2:38 to go. Yet here he stood on the backdrop of personally challenging himself after calling out Johnson and had to stand and watch rookie Terrence Williams targeted 10 times during the contest.

Come on are you serious??

Now listen it’s easy to point out there was a better way for Dez Bryant to channel his emotions. However football is an emotional game played by men who do wear their passion on their sleeve. No one seemed to mind just two weeks ago when a livid Tom Brady berated his young receivers on the sideline for running the wrong routes and dropping passes against the Saints. In fact, the game’s announcers speculated why he was upset and justified it all at the same time. It could have gone for as long as Dez’s situation but the camera panned away after a few moments.

Bryan Cox had the same thing happen to him in 1995 when they caught him upset during a Monday Night game against Pittsburgh. Now he cited racial bias and asked why it wasn’t a concern when Dan Marino went off on the sideline. Remember the blow-up about Troy Aikman supposedly yelling at all African American players back in 1995?? What about the sideline blow-up of Ken Norton Jr & Thomas Everett during the 1992 NFC Championship Game against San Francisco??

This is football and you’ll have some of that and then you move on from it. There are fights during pre-season and some harsh things that are said on the sideline. Yet when the final minutes were ticking down in Norton, and Everett’s case, they were kissing cousins joking about their first Super Bowl visit sided by side. Norton with the football he intercepted Steve Young with under his arm to seal the win. This will blow over also but masked the big reason it happened and we’re speculating. Why was he upset in the first place??

He watched the Detroit Lion feed the ultimate competitor in Calvin Johnson the football. They were committed to getting him the football. In this instance, Bryant didn’t see that same commitment on the Cowboys part. Don’t even begin to bring up Cris Carter, Jerry Rice, Sterling Sharpe, and Michael Irvin from a generation ago being different. They were the exact same way. Taylor Blitz Times readers know I have the footage to back up exactly what I’m saying too. Yet overcoaching brought this on, trying to show how diverse the Cowboys attack can be rather than get the best players the football.

It was a good thing Bryant did go off instead of watching his teammates wander listlessly through the final plays of another 4th quarter meltdown. This team has anointed Tony Romo the leader when the defacto on the field, in the trenches “follow me” ass kicking player hasn’t been seen in Dallas since Marion Barber and Terrell Owens. Did he go overboard?? Come on every incident we glamorize about football is about extreme emotion on the sideline. We joke about it in the Jim Harbaugh commercial when he’s over the top coaching little kids. We joke about it when the black coach replaces Robin Williams after biting a snicker candy bar yelling “Now let’s go for it!!” at the top of his lungs.

Did you know that once upon a time the Baltimore Colts weren’t playing up to their ability in 1970?? They were in a team meeting when Mike Curtis lit into his team when he told them “We have three games plus the (postseason) . I’m going to play the same way I always play. And you’re going to go full speed in practice and in those games or I’m going to kick your ass, myself. Remember I said that.”  The Colts won all six and won Super Bowl V ironically against the Dallas Cowboys.

Someone needed to light a fire down in Dallas. Maybe they won’t coach past their strengths again leading to another meltdown. Fire can’t come from Jerry Jones, only fear. Fire comes from passionate teammates who are in the trenches with you. Dallas you’re 4-4 what are you going to do with this??