Al Davis said he wanted a ring so nice that he wanted a Raider to be able to meet the Queen of England and not feel he had to take it off. Mission accomplished!! One of the unique features to every Raider championship ring is that Al Davis uses the AFL “A” and not the AFC “Block A” on the side. This was the bauble for winning Super Bowl XI on January 9, 1977 over the Minnesota Vikings 32-14. 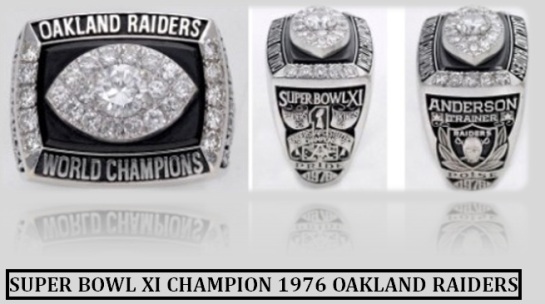 They finally clutched the prize, Madden, Stabler, Biletnikoff, Tatum, Hendricks, Matuszak, Sistrunk, Villapiano, Atkinson and Raider Nation.  What is strange is how the Raiders could have totally written sports history.  They played in 5 other conference championships before winning the Super Bowl in 1976.

That’s without talking about the “job” they got in the Immaculate Reception in the 1972 AFC Divisional playoff that would have put them in a SIXTH. I cornered Franco Harris in 1991 and tried to get him to exact the ball hit Fuqua and not Tatum and he wouldn’t do it!! sigh…yet I digress  After playing in Super Bowl II, the Raiders could have been in Super Bowls 3,4,5, 8-10, & 12. So this was the culmination of pushing to be the best over all those years.

Yet stop and think about how history could have been written had they won those games.

As for the team that always threw deep, I find it ironic that the Super Bowl XI MVP was a supposedly slow, couldn’t get deep, that left the NFL as the leading playoff touchdown in receptions and yards before he left in 1977 and that is Fred Biletnikoff.  My man was busy cookin’ the best that the NFL had to offer at CB.

It was understood when the game was on the line they went to the diminutive route runner from Florida St. Fred Biletnikoff had only 4 catches in Super Bowl XI, yet those catches set up 3 Super Bowl scores, and was the focus of why the Raiders blew out the Vikings in Super Bowl XI.

He was a tremendous performer and the predecessor of Lester Hayes’ use of stickum in 1980.   He was the all time post season reception leader and yardage when he retired. Who broke his record? Cliff Branch…the man he showed the ropes on being an NFL receiver.  Jerry Rice eventually broke these records but you have to appreciate how things became the way they are.

Now Raider fans, you guys have to let go of the Immaculate Reception as I had to after several beers with Franco.  You did get jobbed and that ’75 AFC Championship Game icy field in Pittsburgh was fair when you guys played head games with the Chiefs and others about leaving the water on all night, hence the wet field. It’s just gamesmanship.

Well the idea the refs were out to get you guys disappeared in the ’76 divisional playoffs with the Sugar Bear Hamilton roughing the passer call on Stabler.  That call was among the worst ever!! Remember that call?? In the AFC Divisional playoff in 1976 you were losing to the Patriots 21-17 and were about to have to face a 4th and 17 with 1:38  left. Just seconds away from being upset when the flag came in…

So Stabler scored the winning touchdown with :10 seconds left and you were off to the AFC Championship. Big beneficiary of a very bad call. Hamilton hit Stabler under the arm…

OK then you guys got robbed in Denver on Lytle’s fumble in the 1977 AFC Championship game….ok maybe there is somethin’ to it.  The tuck rule with Tom Brady and the Patriots in 2001…damn you guys are on to something!! Just keep in mind you have had your share of calls also.