When the Philadelphia Eagles drafted Jalen Hurts with a surprise 2nd round pick, specuclation took off as to why. Many pundits were dumbfounded with the selection where fans argued the Eagles would use him as trade bait. The Chancellor of Football took a different approach… Hurts was insurance against Wentz not making it back to his 2017 pre-injury form. 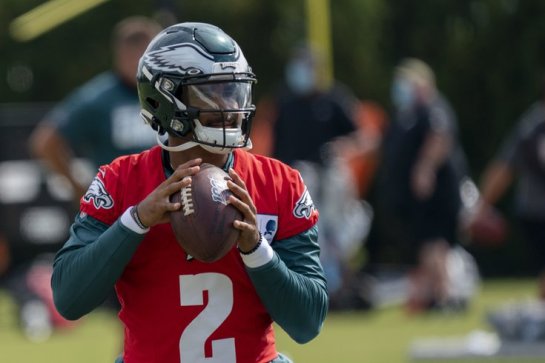 Lets be honest his battle is psychological as he is reeling from the fallout from watching his understudy win Super Bowl LII. Once Nick Foles carried the Eagles to that title he has pressed to live up to his $128 million contract and 1st round status.

Opening with 2 losses has dropped Wentz to 14-15 as the starting QB since his injury late in the 2017 season. This doesn’t include the NFC Wildcard loss when Wentz was knocked from the game by Jaedevon Clowney. Now sure he has said the right thing after the team moved on from Foles. Then said the right things after signing his contract extension yet something is missing.

Wentz has been accused of changing the plays Coach Pederson sent in and his personality has alienated several of his former offensive teammates. Many would be considered in the in the Foles camp as Wentz comes off as aloof and “not a locker room guy.” Many fans want to dismiss it yet he is surrounded by new receivers and running backs. At some point the issue is the quarterback. The offense is the same and the two constants are Pederson and Wentz.

In 2 games this team has failed to score 20 points in either contest. Carson has completed just 58.5% of his passes having gone 50 of 85 for 512 yards 2TDs and 4 interceptions. Which includes 8 sacks and he has been as indecisive taking the sacks as he has where he’s gone with the football. This is from the team whose continuity at the quarterback position made them an NFC East favorite and now they’re in the basement looking up at a Washington team that doesn’t even have a logo.

If Carson looks bad in a 3rd straight performance its time to sit him down. Even if we look back in Eagles history 1st round pick Donovan McNabb was forced into the lineup due to ineffective play by starter Doug Pederson… uh yes the same man who is now coach back in week 2 of ’99:

The Chancellor has been saying all along the Eagles drafted Jalen Hurts as insurance and this is where it pays off. Everyone always says the right thing about the rookie QB not being ready. Well the offense can be tailored to Hurts’ strength as young signal callers are making their way even when forced into action. See Justin Herbert’s performance last week for the LA Chargers.

There is no perfect time to put a rookie quarterback in there. Sometimes its a baptism by fire…

If the Eagles give another knock kneed performance its time to turn it over to see what Hurts can do.

This nugget
TBT = Taylor Blitz Throwback... I remember taking a quick look in the Sports section to see NFL transactions and ran into this: Tommie Smith selling his gold medal earned in the '68 Olympics where he and @[1733036766:John Carlos] made the most famous sporting event protest in history.
Man.... damn good hit @chidiahanotu you owe your boy @garrisonhearst a cup of coffee for this hit. 😎🤣 Digging through the archives for a Brett Favre highlight in 2001. Gotta get to work.
Football Friday- Taylor Blitz Times Flashback: Tied to tag you Adrian... @takeospikes51 you did rough Elvis Grbac and held Raven WR Travis Taylor earlier in the highlight during the goal line stand... but cuz you closed it out with the pick six! Super Bowl champion Baltimore Ravens first loss in 2001 in the 2nd week. #taylorblitztimes #cincinnatibengals #coreydillon #takeospikes #adrianross #dicklebeau
Alright Coach... want trying to cut your pick off. @coachcfuller24 Better edit
Loading Comments...