With Dwight Clark’s passing a few weeks back it was nearly impossible to not think back to his signature play and this game. The Catch ushered in an era where the 49ers became the NFL’s signature franchise and brought Dallas down a notch. A win 2 weeks later in Super Bowl XVI in Pontiac gave Bill Walsh the platform to showcase his genius, The West Coast (Paul Brown’s) Offense, and launch an era he coined “Camelot”. Joe Montana became one of the NFL’s newest faces and would dominate the decade.

Dwight Clark as he will appear forever in the minds of fans everywhere.

Going into the ’81 NFC Championship the 49ers were an organization that not only hadn’t won a championship in their 36 year history. They were 0-3 against Dallas in the postseason. Even worse is they had left 2 NFL Championships on the table by celebrating victory prematurely then succumbing to huge comeback defeats.

In 1957, Y.A. Tittle, Hugh McElhenny and the Million Dollar Backfield bolted to a 27-7 3rd quarter lead in a playoff with the Detroit Lions. Detroit battled back and won 31-27. Then in ’72, a revenge minded 49er team fresh from back to back defeats in the first two NFC Championship Games to Dallas jumped to a 28-13 3rd quarter lead. Amid the taunts and trash talk Landry replaced ineffective QB Craig Morton for Roger Staubach. In another classic meltdown Dallas stormed to win 30-28.

Each of these losses crippled the franchise as they went into a tailspin for a decade both times. 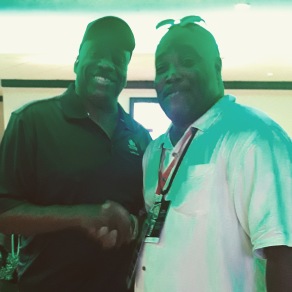 When the 49ers traded for future Hall of Famer Fred Dean #74, the 49ers became a legitimate contender in 1981.

Now here was a 3rd trip to the summit for an organization fighting for respect. Why would this generation’s group get over the hump where previous teams had failed?? This was the dreaded Dallas Cowboys they were 0-3 against in the postseason. 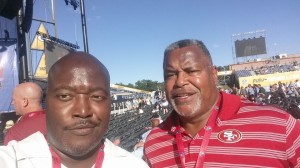 At the time Hall of Fame Coach Tom Landry was the Bill Walsh / Bill Belichick of his era having taken the Cowboys to the postseason 15 of the last 16 years. Not only had he won 2 Super Bowls, his teams was playing in a championship game for the 10th time with this tilt out in Candlestick. The NFL up to this time hadn’t seen this type of extended success. Not nearing 2 decades worth. Well a berth in Super Bowl XVI was at stake and all he had to do was get past this bunch of no names out in California. Consensus at the time by the national media cited that he would:

Eric Wright’s clutch tackle on Drew Pearson saved the game but Dwight Clark’s catch remains it’s signature. Prestige is much like momentum. You can’t exactly define it yet you know it once you feel it and see it. The mantle of prestige and esteem the Cowboys held transferred to the 49ers the moment Clark came down with the football. From that point on the buzz from NFL media in print and television began with Bill Walsh and his organization. His West Coast offense became the dominant offensive approach for the next four decades.

For those of us old enough to have watched this game and remember those years it was a unique time in NFL history. A young Chancellor of Football was watching this frozen in -63 wind chill in Columbus, Ohio. These were bigger than life characters that were shaping how I viewed the game and learned of all those making history. When we lose Dwight Clark, who was one of those figures, a piece of us go with them. Things won’t be the same but thanks for the memories. Thankfully former 49er Coach Steve Mariucci shared this on Twitter and I had the chance to thank Steve in Canton a few weeks later. *see pic at end of article*

Mariucci was a beneficiary of the prestige borne of The Catch. They were a well oiled and running dynasty 16 years in when he succeeded George Seifert in 1997. Hmmmm…isn’t that the same 16 year mark when Landry had the Cowboys in San Francisco back in ’81?? For irony…. Mariucci and the 49ers also lost the NFC Championship Game that year. Yet that story…can be told at another time. 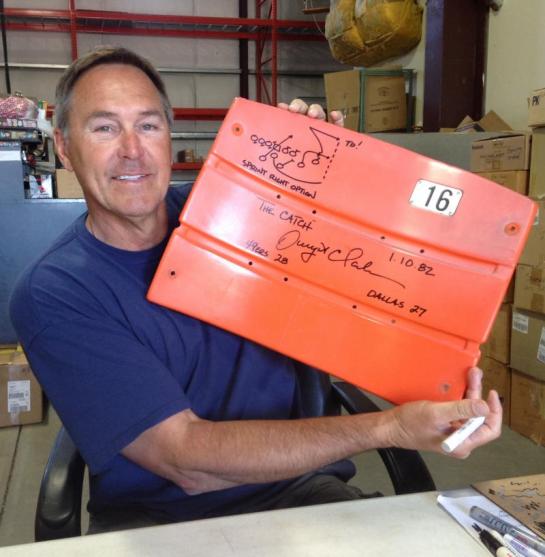 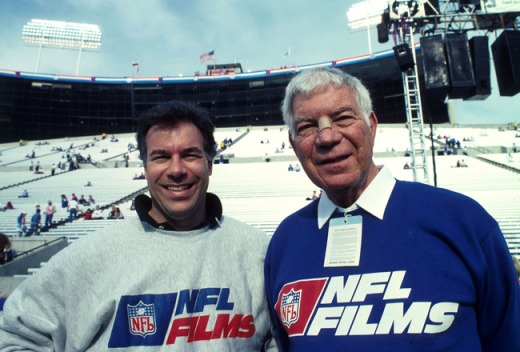 Steve Sabol with his father Ed, founder of NFL Films

What makes us love NFL football as much as we do? The game itself with its players giving their heart and soul on the field is what keeps us coming back. We love the game, its players, strategies & coaches. Yet it was the work of Ed and Steve Sabol with NFL Films that helped fuel our imagination through great story telling. You were able to get an account of eras gone by that you could only read about. Now most feel as though the book is always better than the movie, well not in this instance. If you’re like me you’ve grown up with these images of iconic figures over the decades. What makes it such an interesting test subject is football is a very visual sport.

I can still remember the day I saw my first NFL Films production back in the summer of 1977, ironically on a Sunday. Living in Denver, Colorado at the time they had just previewed the upcoming Broncos season. I had come inside to cool off when a new show came on featuring The Ice Bowl, the 1967 NFL Championship played in -15* weather between the Packers and Cowboys. The frozen images burned into my mind as John Facenda’s legendary voice gave it such theatrics, I felt like I was watching a monumental event. From that point on I looked for anything NFL Films to supplement reading about players in the old Punt, Pass, and Kick books at the local library.

Through the years everything they did I gobbled up. Whether it be their work in 1982’s History Of Pro Football for HBO, Inside The NFL highlights, NFL Yearbooks on ESPN, Monday Night Matchup on ESPN hosted by Chris Berman, Steve Sabol, and Allie Sherman. It was because of that relationship Chris Berman had instant credibility with me. All of this before we get to the Super Bowl highlights every year and then their own Lost Treasure series starting in 2000.

Yet it’s the images through the years that come to mind when you think of NFL Films. Jackie Smith’s touchdown drop and the call “Bless his heart, he’s got to be the sickest man in America.” You don’t remember that from a live broadcast, this was their work covering Super Bowl XIII. How about Jack Tatum hitting Sammy White in the Super Bowl XI highlight knocking off his helmet then hearing “Helmet flying one way! Chin strap the other! Holy Toledo!” Those were rebroadcast productions with radio voices Verne Lundquist and Bill King layered over slow motion captured video. What’s funny is you can’t remember the call from either NBC broadcast. Yet these legendary calls are playing in your mind as you read this. Dramatic…that was the power of NFL Films

All these images and great story telling helped sell the game to the American public as great as the game itself. Ed Sabol’s induction into the Pro Football Hall of Fame was great to watch for how great an ambassador he and his company had become. What started out as Blair Motion Pictures filming the 1962 NFL Championship between the Green Bay Packers and New York Giants, has become a crown jewel of the NFL. The history of the NFL game can’t be told without them. Thanks Ed and Steve Sabol.

For all the talk about Madden, quiet as it's kept Montana Football '94 had way better gameplay back then... this and Tecmo Super Bowl were addictive.
"Even if it's jazz or the quiet storm, I hook a beat up convert it into hip hop form!!" #rakim #ericbandrakim #oldschoolhiphop #iaintnojoke #iaintnojokeiusedtoletthemicsmoke
Awaiting my floating shelf for these.Thinking about my dude Mike Davis (RIP) I kept looking at the hat like whats on it? I forgot it was autographed by then Raider GM Reggie McKenzie at the time. Can you see it?? Hard to see written black on black. #laraiders #oaklandraiders #reggiemckenzie #mikedavis #angrycrab
TBT = Taylor Blitz Throwback Yeah... 4 decades before social media made selfies fashionable... Crazy as it was The Chancellor had a poster of himself as a senior in high school. Absurd?? Yes I know...right above my Super Bowl XVIII LA Raiders pendant... all the way back in late 87. Last game of the season against Eastmoor. Mifflin finishing 10-0.... again #MifflinPunchers #classof1988 #fall1987 #ColumbusCityLeague
Mike's response to surprising him with my "Red Right 88" article. https://wp.me/p18f1N-1pV
Snapped a pic with Hall of Famer Mike Haynes yesterday following Mike Davis Celebrstion of Life Service