As the final seconds ticked away in Sunday Night’s 16-15 Wildcard win in Soldier Field, it became apparent Nick Foles had saved the 2018 Eagles season. The magic carpet ride last year that concluded with a Super Bowl MVP and this uniform display at the Pro Football Hall of Fame seems to have been extended.

If the Eagles pull off another upset in the divisonal round against the Saints, Foles will have won his 5th straight post season game.

Now ask yourself a question: “What is the definition of a franchise quarterback?” He is a signal caller who can be counted on to lead his team to a championship and keeps his team in contention over an extended period of time. Preferably a 5-7 year window. 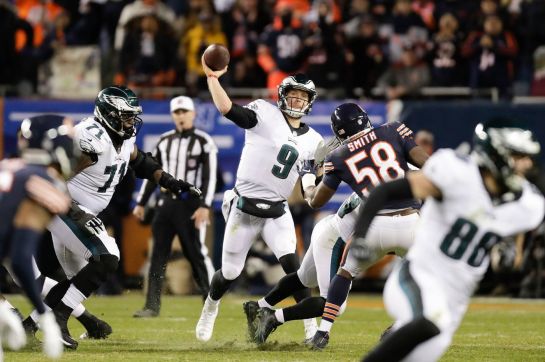 Yet when you think of Foles, he is thought of as a caretaker of the position until 1st round draft pick Carson Wentz returns from injury. By all accounts Foles was coming to the end of the line in Philly. He had been the dutiful soldier who stepped in and led the Eagles to a championship, then took his place behind Wentz again. He said all the right things but things will change with another berth in the NFC Championship Game.

How do you turn your back from a QB that leads you to multiple conference championship games?? I know Wentz was drafted in the 1st round of 2016 but there is no guarantee he has the moxie and cool to win NFL playoff games. Think back to another 1st round pick, Donovan McNabb, and the 3 straight NFC Chanpionship losses he had before breaking through in ’04. Would the Eagles have stayed with McNabb in those losses had they a Super Bowl winning QB to replace him??

Think back to 1992 when former Eagle OC Frank Reich quarterbacked the Bills to a 41-38 win in the greatest comeback in NFL history when they had been down 35-3 in an AFC Wildcard Game. He then engineered a 23-3 win in Pittsburgh the following week. Having lost 2 of the previous Super Bowls and HoF QB Jim Kelly healthy, Bills fans and local press were split 50/50 on whether they should stay with the “hot hand” of Reich going into the AFC Championship. After they won it, it was the 1st question Kelly was asked about by NBC and it followed him in the weeks leading up to Super Bowl XXVII.

Carson Wentz has yet to play in a playoff game. The closest he came was 2017’s 43-35 win over the Rams in the LA Coliseum when he blew out his knee. The Eagles did achieve homefield advantage with the win however Foles has eclipsed even that:

Had Chip Kelly not sabotaged the Eagles in trading away DeSean Jackson, LeSean McCoy and Jeremy Macklin he could have been doing this from 2013 on.

In the penultimate game this year against the Texans he inspired his team while throwing for a team record 471 yards to cement a playoff berth. This was delivered with their season on the line.

Did you know that both Carson Wentz and Nick Foles have now each played 40 games for the Eagles?? Guess who has the higher passer rating (93.2 -92.5)??

Now keep in mind Carson Wentz won the Taylor Blitz Times Offensive MVP last season so this isn’t a knock against him. It’s just that Foles infuses juice into this team and he has rallied the offense where it sputtered some with Wentz coming back from injury. With Foles at only 29 years of age to Wentz’s 26, he has entered the realm of mature quarterback where the game has slowed down for him. In this day and age where you can’t hit the qb, he can play until he’s 40. He’s grounded and as he appeared in last year’s Super Bowl, the brightest of lights didn’t make him flinch. In fact he played better… just like these games down the stretch. 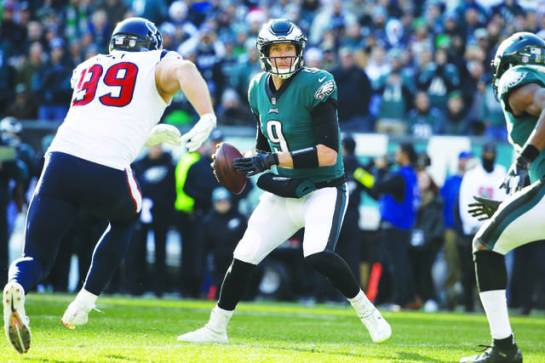 Foles threw for a team record 471 yards on the NFL’s 12th ranked team.

Eight weeks ago the Eagles suffered the worst loss for a champion in the 52 year history of the Super Bowl 48-7 down in New Orleans. Now they return to the scene of the crime in the divisional playoff round. If Nick rises to the occasion and pulls off this upset it may turn the tables and the team should keep Foles and trade Carson Wentz.

What about a trade of Carson Wentz to Denver for Von Miller and a #1pick if John Elway was serious about trading Von??

What about a trade of Carson Wentz to Tennessee for Pro Bowl DT Jurrell Casey and Marcus Mariota to be the backup?? Team DT Fletcher Cox with Casey to form a tandem to rival Donald and Suh out in Los Angeles.

What about a trade of Carson Wentz to Jacksonville for LB Myles Jack and a #1pick?? Or get Tom Coughlin to throw in CB Jaylon Ramsey??

Think of the possibilites of what would be available trading across conference to teams desperate for a franchise quarterback??

Nick Foles could have this on the table with a win this week down in New Orleans. Keep in mind he lost a tough game 26-24 in the Superdome to Drew Brees in 2013. In that game he was 23 of 33 for 195 yards 2 TDs and no picks. If he handled the noise and pressure of facing Drew Brees in his 1st ever playoff game, will he be nervous 5 years later as a reigning Super Bowl MVP?? I don’t think so…

Nick Foles… your mission should you choose to accept it…