The late Bum Phillips when discussing Don Shula’s coaching abilities once said “Shula can take his’n and beat your’n then take your’n and beat his’n.” In layman terms he could beat any opponent no matter the personnel he had or was given. This fits the 2013 season for several National Football League coaches but the one who’s coaching style best illustrates this is Chief’s coach Andy Reid.

Coach of the Year is Andy Re….wait that’s not Reid.

Consider the fact Kansas City was coming off of the worst season in NFL history. Not only was the coaching staff headed by Romeo Crennel escorted out the door. The players left behind endured a 2-14 season, along with the suicide of former teammate Jovan Belcher. At the practice facility no less. In 2012 this team had lost 13 of it’s last 14 and scored just 211 points all year. Good for dead last in the NFL.

All Reid did was breathe life into an organization with a forgotten quarterback in Alex Smith. Whom San Francisco discarded when Colin Kaepernick stepped to the fore midway through last season. Consequently he provided Smith with his 6th offensive coordinator in 8 years. 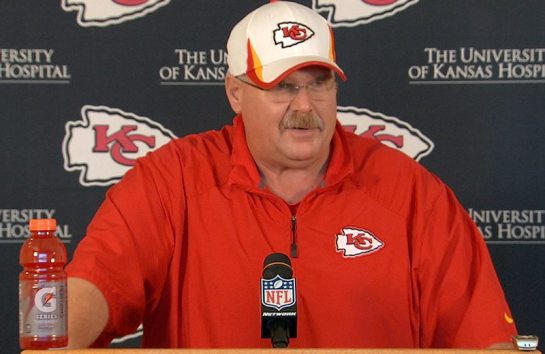 Just as he had with Donovan McNabb, Jeff Garcia, Brett Favre, and a resurrected Michael Vick, he got the most out of his quarterback and made the playoffs. Smith finished with career highs in yardage (3,313), touchdowns (23) and nearly eclipsed his career low in interception percentage (1.4% in 2013 v 1.1% in 2011). By the way that led the league

Aside from Smith, he performed this with players that had been with the Chiefs the previous year. His career was at a crossroads after being dismissed in Philadelphia. His message had grown stale as his Eagle’s free-fell from playoff contention losing 11 of 12.  Reid has his team heading to Indianapolis for a wild card tilt with the Colts this Saturday. However that game turns out this has been a successful season for both he and the Chiefs.

By the way… Taylor Blitz saw this coming: https://taylorblitztimes.com/2013/05/13/2013-kansas-city-chiefs-preview-tools-for-a-resurgence/

2. Bill Belichick – What else needs to be said about Belichick’s coaching abilities?? In 2013 he began the season without the top 5 receivers from the year before. He endured the awful controversy that is the Aaron Hernandez murder case and steered his team onward. Then he loses two of his leaders in perennial Pro Bowler Vince Wilfork and leading tackler Jerrod Mayo for the season. Yet here they are 12-4 entering the playoffs as the #2 seed having already beaten #1 seed Denver in the regular season. He’s two wins away from coaching a record 6th Super Bowl and participating in his 9th. 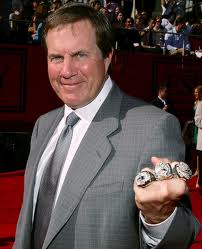 He’s the greatest National Football League coach since Vince Lombardi without a doubt. Under normal circumstances he would be runaway coach of the year. He’ll have to settle for second on my list because he did have Hall of Fame quarterback Tom Brady to help guide the ship. The Patriots have played in the last two AFC Championship games and we had them predicted to make it to this one as well. Their missing key contributors and roll into the playoffs having won 5 of their last 6. One of those is over the Denver Broncos. Please don’t underscore that for it’s importance if they play again.

3. Chip Kelly – “Man he’s not going to win with that gimmicky college offense in the pros.” You can remember hearing that before the season and it died somewhere around week 7. I had my reservations as well but no one counted on Nick Foles becoming one of the National Football League’s best quarterbacks. Yet they have the NFL rushing champion in LeSean McCoy and the defense is making timely plays. He infused a new atmosphere in a place Andy Reid used to call home but he is using Reid’s old players. How he does in the NFL playoffs will dictate how he’ll take command of the NFC East next year.

Congratulations to Andy Reid…Taylor Blitz Times Coach of the Year

Forgot I have these lit platforms... Need to get my Lambeau Field helmet signed
The Matrix? I think Ive heard of it... lol #thematrix #thematrixresurrections #thematrixmovie #theanimatrix #thematrixreloaded #thematrixrevolutions #enterthematrix #thematrixpathofneo #pathofneo
After dinner walk...why not enjoy a sunset?
Ahhhhhhhhhhhhhhh
Gotta love the beach...
Me and this cutie starting out at "The Beach Ball" and you know "Mutt Lynch's" is coming up kids. #newport #socalishome
Loading Comments...