The WordPress.com stats helper monkeys prepared a 2015 annual report for this blog.

The WordPress.com stats helper monkeys prepared a 2014 annual report for this blog.

The concert hall at the Sydney Opera House holds 2,700 people. This blog was viewed about 60,000 times in 2014. If it were a concert at Sydney Opera House, it would take about 22 sold-out performances for that many people to see it.

Can a week 2 game be a must win situation?? It is if you are the 2012 Green Bay Packers. A loss tonight would not only drop the Packers to an 0-2 start, it would mark back to back home losses. As a matter of fact, it would be 3 straight losses in Lambeau dating back to last year’s playoff loss to the Giants. They would also be 2 1/2 games behind their division rival Chicago Bears, and two NFC losses would be negative for wildcard ramifications. So I ask again… Can a week 2 matchup be a must win game?? Absolutely!!

However the Chicago Bears are coming in flying high after a week 1 41-21 trouncing of the Colts. The Bears looked great as Jay Cutler,Brandon Marshall, and Matt Forte showed a glimpse of an offense that looks to come of age this season.

So far so good and why would the Bears  be motivated?? Well ever since the 2010 NFC Championship loss to the Packers, Cutler’s toughness has been in question while Aaron Rodgers has been anointed a great quarterback. Now they can hit the

Packers with a haymaker.

Last week, we found the Packers dominated on both sides of the line. They may have been exposed as soft on defense. No Desmond Bishop who is on IR and the Niners last week were torching CB Bush #24. He replaced Charles Woodson who has been moved to safety.

Now add to that WR Greg Jennings may not play… Hmmm?? Now this is when a team wins with it’s back against the wall. The Chancellor doesn’t see it. Had Matt Ryan not rallied them last year in that finale (touchdown with :20 left) they would have already lost 3 straight. After tonight…. It will be

A look at the New York Giants new Super Bowl rings along with their previous editions going back to 1956.

One of the greatest championship rings ever commissioned. When you look at the ring the first thing you look at are the sapphire stones that adorn the “World Championsip” moniker as though its’ the lighted ring around the new Meadowlands.  Yet it’s the old fashioned “NY” adorned in blue that really sets this ring off. Although the Giants have amassed 8 NFL titles, they have garnered 4 in the Super Bowl era. Hence the four Super Bowl trophies atop the design.

One of the more intriguing aspects of this ring is the fact that they used the block “GIANTS” logo from the previous era (1980’s-1999). This being put on the same side as the Super Bowl trophy and score, a 21-17 triumph over Bill Belichick, Tom Brady and the New England Patriots. In our CEO’s estimation, this is the best looking Super Bowl ring ever.

An irony that can’t go… 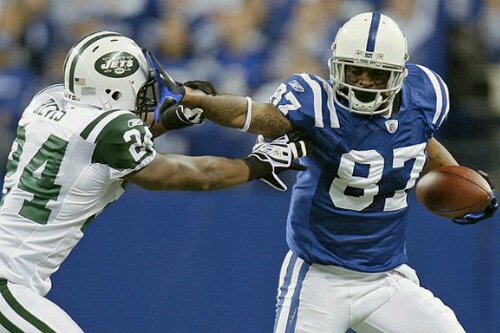 Interesting move and a bit of a gamble on his part. He is banking on a rookie Andrew Luck, and his ability to read zone vs. man. At this point in his career lets face it, he’s lost a step. So he can’t really get deep. He has to run intermediate routes only (under 20 yards) and hope Luck doesn’t read zone when it’s man. If he does, a rookie Luck could throw him into some vicious shots. With a young QB, that will happen as teams will run combo coverages to fool him.

Wayne is taking a risk on this one and his 3 year deal could turn out to be a 1 and done year with moderate success. Time will tell on this one, but as of now Reggie Wayne is headed back to Indianapolis.

Here we are folks, the gunlap to Super Bowl XLVI. It all starts with week one and we’re going to get into it right now. Winners in bold

Saints @ Packers: Packers should win this one relatively easy. 31-16

Falcons @ Bears: Falcons Have to think the Bears will slow down the Falcon offense. Yet will outscore the Bears in this one 24-16

Colts @ Texans: The long reign of the Colts is over with the upstart Texans beating an undermanned Colt team. Texans 30-10

Titans @ Jacksonville: Titans Two rebuilding teams yet the Jaguars aren’t over the release of David Garrard.

Bills @ Chiefs: Too many playmakers for the Kansas City team to lose.  Chiefs 24-13

Eagles @ Rams: Eagles have been rusty but should squeak out a win in first week. Can’t think of score

Lions @ Buccaneers: These are two up and coming teams…have to take the Bucs at home.

Vikings @ Chargers: The Chargers win this one.

Seahawks @ 49ers: Seattle wins this one. More stable at quarterback and defense

Giants @ Redskins: Giants ground game and defensive pass rush will dominate this one.

Cowboys @ Jets: Jets get off on a winning track to get themselves headed for first Super Bowl since Namath.

Patriots @ Dolphins: The Patriots normally win this early season trip and will this time also. Patriots

Raiders @ Broncos:  The Raider ground game wins this one for the silver and black

See you next week, folks.