There had to be some serious angst going through the minds of Seattle Seahawk players, coaches, and fans when the 49ers came back and won the NFC Championship. Just a week prior the Seahawks were :31 seconds away from the biggest road playoff comeback in NFL history. Being down 20-0 in Atlanta, the Seahawks made a furious rally that saw them take a 28-27 lead and a rematch with the San Francisco 49ers was beginning to crystalize.

A team they had throttled 42-13 just three weeks prior. Then Matt Ryan ended those hopes with two completions and a last second field goal for Atlanta to escape 30-28. As the two teams left the field that day there was a sense the better team hadn’t won. Then to watch history repeat itself with the Niners comeback and you could feel the groans coming from the pacific northwest. Furthermore, how different would the NFC divisional against Atlanta have been had sack leader Chris Clemons (11 1/2 sacks) not been injured??

Quarterback: For all the talk of Andrew Luck, Robert Griffin III, and even Colin Kaepernick, it was Russell Wilson that was the most impressive first year signal caller in 2012. It was his play that set in motion the late season quarterback change in San Francisco. They were tiptoeing around the issue playing Kaepernick in spots until they saw Wilson’s progressive improvement at the season’s midway point. Then the Niners pulled the trigger.

Center Max Unger was an All Pro and protected Russell Wilson like The Hope Diamond.

Russell’s performance last year was the best rookie quarterback season in NFL history. Not only did he help turn around the fortunes of the Seahawks, he tied Peyton Manning’s rookie record of 26 TD passes. However he only threw 10 interceptions compared to Peyton’s 28 during that same 1998 campaign. His total stats were 252 of 293 for 3,118 yards along with 94 car. for 489 yards and 4 touchdowns. He never showed any nerves nor did the games ever seem too big for him. Where the Seahawks started 1-5 on the road, Wilson’s play improved and they won their last 3 including a wild card win in Washington.

The key to his use of The Pistol was he improved his throwing touch and ball placement as the year went on. He knew when to throw the ball away as much as when to run when the ‘read option’ was called. Unlike a few of the other quarterbacks in the same offense, The Chancellor of Football doesn’t see a sophomore slump. The number one reason is he had to endure the baptism by fire at the beginning of last season. Where others like Luck and RGIII seem to hit a wall, Wilson kept improving and was within :31 seconds of the NFC Championship. Head Coach Pete Carroll has to get him in camp and get working on his second season and keep him from having his head in the clouds. At quarterback the Seahawks are Super Bowl quality. 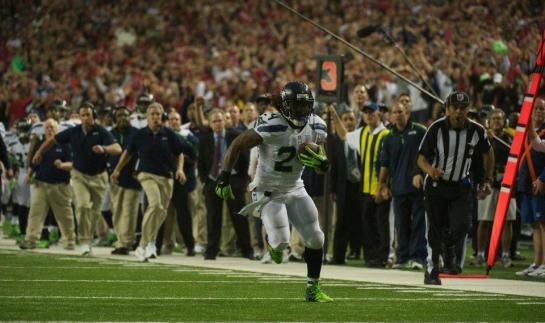 Marshawn Lynch closed in on the goal line during the playoff loss to Atlanta.

Backfield: Is there a tougher running back in the NFL than Marshawn Lynch?? Along with Adrian Peterson of the Vikings, no running back clearly defines his team and inspires it through his play. He powered for a career best 1,590 yards rushing and 11 touchdowns as he benefited from the Pistol and the read option in 2012. Last year Lynch was able to get a step on linebackers who were hesitant to attack the line of scrimmage trying to defend against Wilson pulling the ball out and running himself. He was able to be full speed at the point of attack in many of his runs. It’s no coincidence he had a career best 5.0 yards per carry average which was up from 4.2 just a season before. Both years he was a Pro Bowl player. Entering his 7th season, “Beast-mode” may have his career prolonged with this offense allowing less wear and tear on him. He’s only turning 27 this year so there is at least a three year run with him as the featured back barring injury. This team is Super Bowl quality as long as Lynch is running the football.

Receivers: This could be where the Seahawks address a need in this year’s draft. Sidney Rice (50 rec. 748 yards 7 TDs) needs a new running mate. Golden Tate (45 rec. 688 yards 7TDs) benefits more from Wilson’s mobility to get open than Rice does. With the right compliment, Rice could return to being a 1,200 yard receiver as teams try to jam the intermediate area (15 yards and under) playing the ‘read option’, it’s fakes and a bigger better receiver that can get open underneath. Because of his physical nature, Tate is better in the slot where he can block and doesn’t shy away from contact. Ask Cowboy linebacker Sean Lee after last year’s encounter.

When the team is lined up in more traditional sets, Wilson has Tight Ends Zach Miller (38 rec. 396 yards 3TDs) and Anthony McCoy (18 rec. 291 yards 3TDs) to keep the chains moving. Tactically they are good enough as a unit to win with but could use an upgrade at the ‘Z” receiver and that would free Rice to attack the deep safeties. If they don’t make a move here they will stay below average.

LT Russell Okung is one of the best tackles in the NFL.

Offensive Line: This was one of the quiet strengths of the team last year and should be a staple in 2013. John Madden gave his award to the San Francisco 49ers offensive line but this group had a better season. Not only did they give up fewer sacks (33-41) but they paved the way to 2,579 yards (3rd best in the NFL) and 17 touchdowns. Center Max Unger and Left Tackle Russell Okung both made the Pro Bowl and are going into their 4th and 3rd years respectively.  In two games against the 49ers they only game up 1 sack against Aldon Smith in both games combined. Without any weaknesses, this group looks to be intact for the next three years and is Super Bowl quality.

Defensive Line: The end of the line for the Seahawks came when it was announced that sack leader Chris Clemons was going to miss the NFC Divisional round against Atlanta. They couldn’t mount a pass rush and Matt Ryan was never sacked in the game. This is where the Seahawks could go after another pass rusher whether they bring in a free agent or draft a few players. Clemons had 40 tackles to go along with 11 1/2 sacks and needs some help from LE Red Bryant never got to the quarterback all year. That has to change if they’re to get where they want to go. Designated pass rusher Bruce Irvin did amass 8 sacks but you have to be able to rush the passer on every down since it’s more of a passing league now.  Defensive Tackles Brandon Mebane and Alan Branch were stout against the run with 56 and 30 tackles respectively. They ranked 10th against the run and had 20 1/2 sacks but could use more quarterback pressures and are playoff caliber up front.

Linebacker: The speed of the Seahawks was most evident at linebacker. Bobby Wagner led the team with 139 tackles and also had two sacks and three interceptions. He had an even better season than divisional rival Patrick Willis at MLB. Whom he might replace in next year’s Pro Bowl with another season like he had. Outside linebacker K.J. Wright started 15 games and garnered 96 tackles and 1 sack. Thes two play a relatively fast game. Trained by Coach Ken Norton Jr, these two fly to the football smothering running backs and tight ends in the under and immediate areas. They don’t miss tackles and at 23 and 24 years old respectively, we should see even more improvement this year. Leroy Hill rounds out this unit and is the greybeard at 30. Will he maintain his starting role in 2013 is a question as this young team develops. This is a Super Bowl caliber group.

Secondary: Twitter feud and arguing with Skip Bayless on ESPN’s First Take withstanding, Richard Sherman is one of the best cornerbacks in the NFL. Last year he made the Pro Bowl with 8 interceptions, 63 tackles, a quarterback sack, and 3 forced fumbles. That’s a tremendous year for a player going into his 3rd season. You play like that, you can talk like that. FS Earl Thomas joined him in Hawai’i after a 61 tackle, 3 interception performance. However a couple of dropped interceptions kept SS Kam Chancellor from joining them. He had 91 tackles and several thunderous shots as the enforcer of the best secondary in football. These three are 24, 25, and 25 years of age and play a fast physical game.

Brandon Browner is at the other corner and stands 6’4. He along with 6’3 Richard Sherman are the first issues that teams face. They can’t throw over them. They also manhandle smaller receivers when they jam them on the line of scrimmage. Don’t forget Head Coach Pete Carroll’s expertise is coaching in the secondary. Right now he has the best in football and is definitely Super Bowl quality.

Overall: If you thought you read the phrase Super Bowl a bunch while you were reading this, you weren’t mistaken. This team was undefeated at home in 2012 and then learned to win on the road as Russell Wilson matured. Their margin of victory at home got wider and wider as the season progressed. In their last two home games they beat the Cardinals 58-0 and the NFC Champion 49ers 42-13. They are aggressive, young and fast.

They were the first team to score 150 points in a 3 game stretch in the last 60 years in the NFL. Even in defeat down in Atlanta, Russell Wilson concluded his rookie of the year campaign with 445 combined yards and almost pulled off a great comeback. If you think this team isn’t on a Super Bowl course for 2013, you haven’t watched the NFL that long. They have no obvious weaknesses. The Chancellor of Football sees the NFC side of the ledger going to this group from the pacific northwest.