When most sportswriters chronicle a franchise’s turning point its usually attributed to the hiring of a coach or a number one draft pick QB who goes on to a Hall of Fame career. One where the culture of an organization completely shifts as the team has a pivotal player & focal point to build around.

Most try to equate the turnaround with the drafting of Warren Sapp and Derrick Brooks when the direction was set in motion several years before these two Hall of Famers were drafted in ’95.

Let’s take you back to the early 1990’s. Tampa was a desolate outpost no one wanted to play for. It was a rudderless franchise that had just finished 1992 having set an NFL record with their 10th straight double digit loss season.

The culture was so demoralized, just 8 years before 1st round draft pick Bo Jackson refused to play for Tampa. He elected baseball instead. USFL refugee Steve Young was so disheartened with the situation he only played 2 seasons. After a 3-16 record as the starter in ’85 & ’86, Young asked owner Hugh Culverhouse to allow him to leave. His trade paved the way for a Hall of Fame career out in San Francisco and the chance to draft ’86 Heisman winner Vinny Testaverde.

Testaverde toiled in Tampa for six seasons, never winning more than 6 starts and exited in the first season of free agency for a backup assignment in Cleveland. Yet before the door shut Hardy Nickerson was the first big free agent to sign on and step through.

Nickerson became the centerpiece of Defensive Coordinator Floyd Peters’ 4-3 at Middle Linebacker and a terror was set loose. He became a sideline to sideline tracker and hit everything in sight. In ’93 he led the NFL in tackles with a team record 214 while making his 1st Pro Bowl and voted 1st team All Pro. It was only the 4th time a Tampa Bay defender was voted to the Pro Bowl in Hawai’i and the 2nd all pro selection since the team’s inception in 1976.

His play was so dominant he broke the team season tackle record in a week 15 win over Chicago. There were still 3 games to go in 1993! So his 1st season ended with 214 tackles, recorded a sack, forced a fumble, recovered a fumble and had an interception.

Or think of it like this… he recorded 96 more tackles than his Hall of Fame teammate Derrick Brooks (118) recorded in ’02 when he was NFL Defensive Player of the Year. Chew on that for a second…

He brought an intensity that was infectious and the Bucs began to stand and fight with their foes instead of conceding defeat. In 1993 Nickerson and the Bucs weren’t highly ranked but held 4 teams to 10 points or less. A Taylor Blitz defensive staple. To match this total,  not including season finales where teams and the Bucs had packed it in… you have to go back 6 years to 1988 to tally 4 teams held to 10 or fewer points.

Earlier in his career he shared the inside linebacking duties in the Steelers 3-4. Yet now he became the successor to Mike Singletary’s Middle Linebacker throne in the old NFC Central. Over the next 7 years Nickerson averaged 119 tackles 2 forced fumbles as he led his young teammates in to battle as they chased the Green Bay Packers in the NFC North who had risen to become league champion. 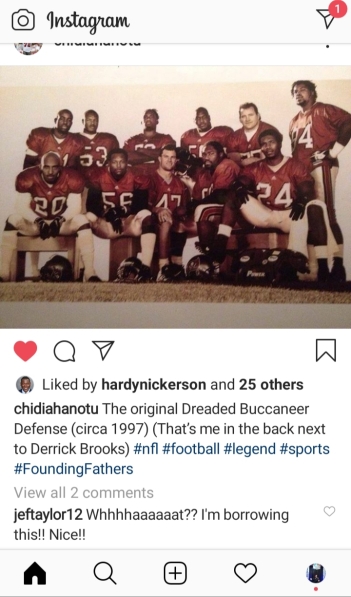 From that point on the organization geared their personnel decisions on teaming Nickerson with blue chip defensive talent. Gone were the high profile offensive players that turned the “Yucs” into the laughing stock of the NFL. Replaced by one forged of grit and toughness that thrived on the visceral edge of football. This culiminated with the 96 draft and twin #1 selections Derrick Brooks & Warren Sapp along with promoting SS John Lynch up from special teams.

The season opener in ’97 saw the seminal moment Nickerson’s defensive mates had grown to match his intensity and tenacity. Perennial power San Francisco came to Tampa and were hammered 13-6 as Steve Young was sacked and knocked from the game by Sapp. He returned a few quarters later where Nickerson sacked him again along with his 6 tackles on the game. Brooks had 10 tackles and Sapp finished with 2 1/2 sacks.

It was this game when the league took notice of the defensive monster rising to prominence in the NFC Central. 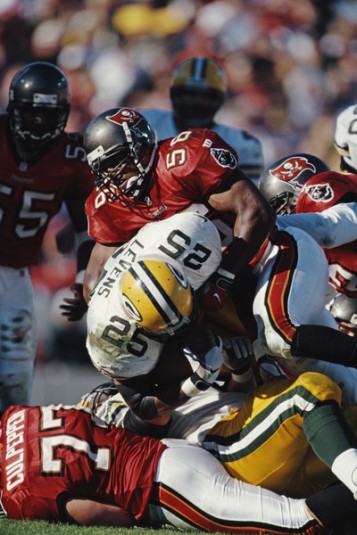 With playmakers all over the field in Tony Dungy’s new “Tampa 2” Nickerson’s stats took a hit. Yet in ’97 he recorded his 2nd highest career total with 147 tackles, the 1 sack and 2 forced fumbles. Hardy made 2 different All Pro teams while being named to the 1st unit and made the 3rd of his 5 Pro Bowl appearances.

However had he made the ’95 Pro Bowl he would have finished on the last 5 straight Pro Bowl teams to finish the 90’s with 6 overall.  Yes Ken Norton and Jesse Tuggle were great that year but let’s take a closer look…

Kenny, Kenny, Kenny Norton…. sigh..  yet this is what the players voted and he was on a #1 defense in San Fran that year. This catapulted Norton’s profile that year and Nickerson was robbed… I meant snubbed. Yet I digress

The ’97 Bucs finished 3rd in defense and made the playoffs for the first time in 15 years where they lost to the Packers. Ushering in the era where the Bucs finished in the top 3 in both 98 and 99 and became a playoff staple under Tony Dungy.

Unfortunately ’99 was the last season for Nickerson with the Bucs. Although he was 34 he finished with 110 combined tackles, 1/2 sack, 3 forced fumbles and 2 interceptions. He made his 5th and final Pro Bowl. His final game in Tampa was the NFC Championship where the Bucs held The Greatest Show on Turf to 11 points and held a 6-5 lead in the 4th quarter.

Nickerson left Tampa after that stellar defensive performance and played for both Jacksonville and Green Bay before retiring.

Yet the men he helped usher in defensive excellence with went on to win Super Bowl XXXVII a few years later. Once the final minutes counted down the first two members of the Tampa Bay family I thought of were former head coach Sam Wyche and Nickerson. It was the late Wyche who signed Nickerson and set him loose in his defense.

For his career Nickerson made All Pro 4 times, the Pro Bowl 5 times and was a member of The All Decade Team of the 1990’s. Do you realize he is the only true Middle Linebacker on the all decade team?

Where Heisman Trophy winners Vinny Testaverde, Bo Jackson, and Hall of Famer Steve Young failed to change the culture of the organization, Nickerson succeeded. The fortunes of Tampa’s franchise changed from the moment he took the field.

Name a better and more consistent Middle Linebacker from the NFC side of the ledger from the 1990’s?? I’ll wait here

His signing at the advent of the 1st season of true free agency, (1993) you have to think of as important as Reggie White in Green Bay. It resurrected a franchise and led to Super Bowl triumph ultimately. It was Nickerson the Buccaneer franchise was building around when they drafted Hall of Famers Derrick Brooks, Warren Sapp, John Lynch, and Ronde Barber.

To see his number isn’t retired nor in the Buccaneer Ring of Honor is a complete travesty. The relative wealth and prestige took off the moment Nickerson signed on and they should have a statue out front. Well one place this historian believes he should be is in Canton.

There is also a fan vote here on the PFHOF website

For induction into the Pro Football Hall of Fame I present to you Hardy Nickerson.

The Chancellor’s past articles advocating for players to be in Canton prior to induction: 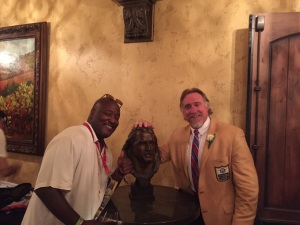 With Kevin Greene after the Induction ceremony.

“Hey big guy!” The laughs at the Hall of Fame party were priceless. 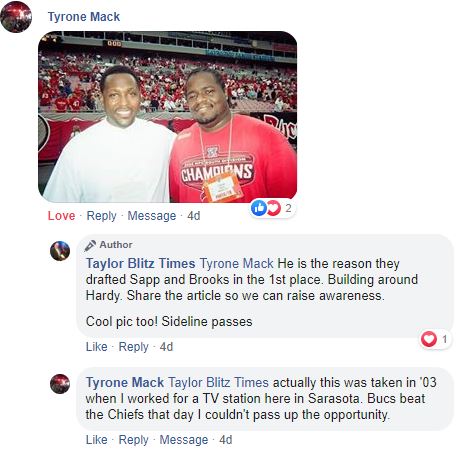 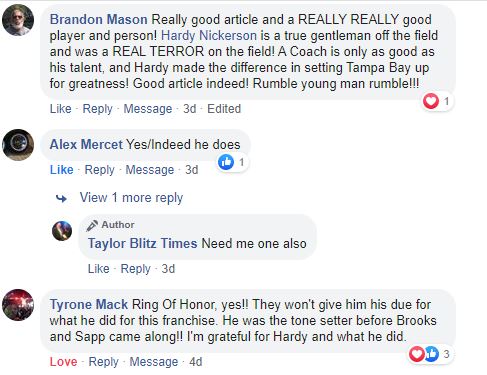 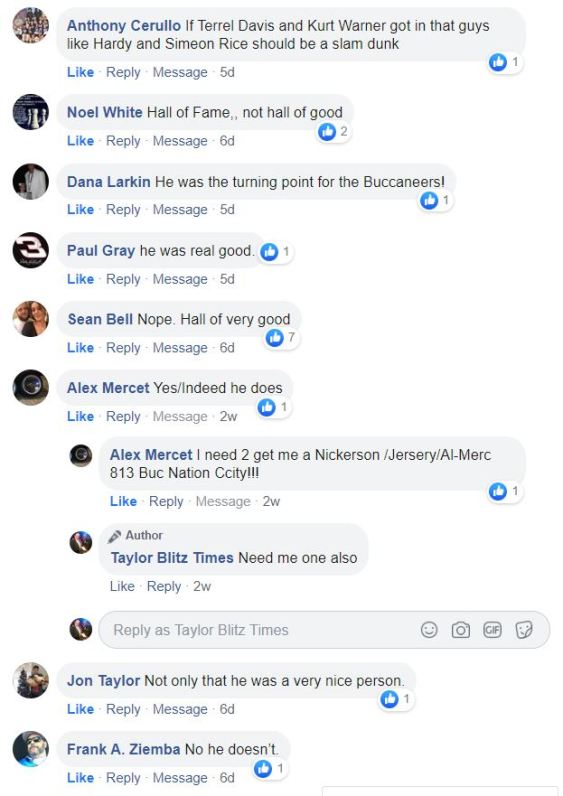 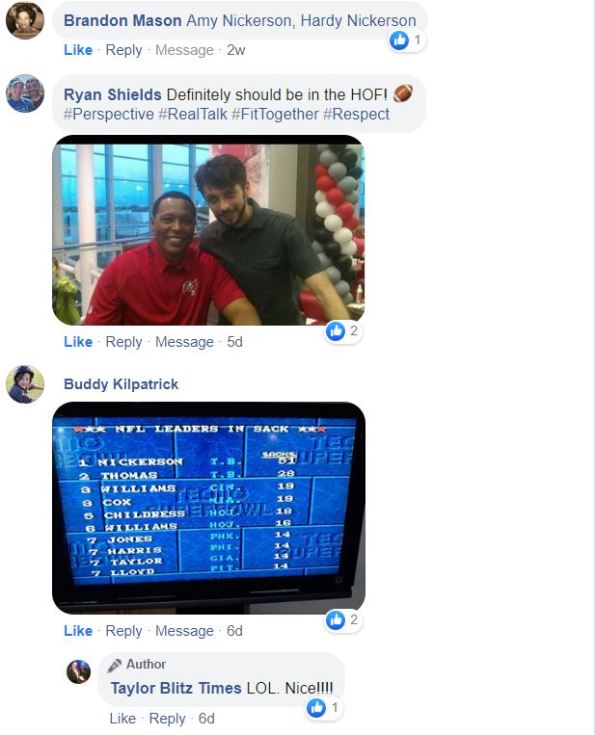